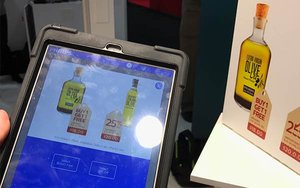 The location of shoppers with smartphones in stores is getting much more precise thanks to LED lighting with tracking technology built in.

The connected lights already are installed and being used in a Carrefour hypermarket in France and are on the way to stores in the U.S.

The system from Philips Lighting was shown to retailers at the National Retail Federation Big Show in New York this week and a U.S. pilot store is expected to be announced soon.

The visible light communication system triangulates by two different LED ceiling lights, each with its own IP address, hitting a smartphone in a shopper’s hand.

No action, such as opening an app, is required on the part of the opted-in shopper, they just need to have their phone out.

The light instantly hits the phone camera and the consumer location is identified to within 8 to 12 inches.

Of course, locating a consumer in a store is not worth a whole lot if that’s all a marketer has.

To that end, Philips Lighting partners with Aisle 411 to include product location as well. This means the location of the shopper can be seen in relation to all products in a store, said Ben Glynn, senior account manager of retail at Philips Lighting, who walked me through a demonstration of the smart lights at the NRF show.

In the display, photos of various food items were placed around the booth. When we neared tomatoes, recipes using tomatoes popped up on mobile tablet we were using. Once we tapped a particular recipe, the locations of each ingredient were highlighted in a display of the store aisles.

When we walked by another item, we received an offer for that item.

The key is that the content was devised more as a service and less as a traditional ad or offer.

For example, the location of tomatoes was highlighted when we walked into the store because tomatoes were an item on the shopping list the consumer created in advance.

Only items on the shopping list were highlighted throughout the store.

Glynn showed another nifty feature called the mobile concierge. One tap on the shopper’s phone and a message is sent to a nearby store employee who can use the location tracking to see the exact location of the shopper requesting assistance.

Many retailers are moving to LED lighting anyway, so adding to that lighting the ability to quickly link mobile shoppers to the items they’re going to a supermarket to get anyway falls somewhere in the no-brainer department.

As long as brands and marketers provide aids and services rather than intruding on the shopping experience, connected lighting will be a win-win.