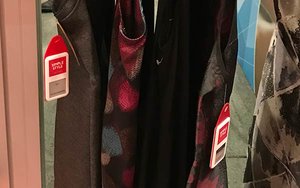 The Internet of Things is moving into retail.

Yesterday I wrote here about the retail move to smart shelves, which include small displays for dynamic pricing along with sensors that can tell when a product is taken off the shelf by a customer.

The shelving also hosts a beacon, to trigger communications to a nearby shopper who has opted in.

However, the shelves are but one connected location and would typically be found in a grocery store, which contains many products (Smart Shelves Track, Dynamically Price The Products On Them).

What became clear as I wandered through the halls and aisles of the National Retail Federation’s annual Big Show in New York this week, was that all kinds of connections are going to be coming to a large number of stores.

Many pieces of clothing already are coming with tags to be tracked.

At the NRF show, there were many and all kinds of sensing tags, such as those prominently hanging from dresses and other apparel on hangers.

There were sensors in LED lighting, such as those from Philips Lighting, which can pinpoint a shopper in a store in context of all the products around them.

Samsung showed a sensor that peers down at clothing or other items from above and tracks the movement of those products, providing a heat map of product movement over time.

Pepper the Robot from Softbank included sensors that can tell if a person is smiling or not, along with some of their likely demographic traits.

There were sensors, now costing pennies rather than dollars, on products that could be automatically read at checkout and, if desired, by paid by smartwatch or smartphone.

Cisco showed what, in effect, was a set of sensors from above, using a small antenna to create a beaconing effect on the floor, in real time, without requiring physical beacons in any locations.

The interesting twist at NRF this year was that much of the novelty of smart and connected things seems to have worn off a bit.

This is a good thing, since demonstrations and discussions were less about the cool new technology and more about the benefits and results promised to be delivered by those innovations.