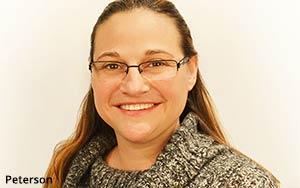 She replaces Jon Hsia, who left for Snapchat in October.

Peterson is tasked with leading the team that is responsible for digital trading, ensuring viewability standards, and programmatic across the agency’s U.S. portfolio of clients, which include Unilever, General Mills, American Express and many others. Just last week, Mindshare won the $135 million Tyson Foods assignment.

Peterson will also lead the agency’s collaboration effort with GroupM’s [m]Platform, the recently unveiled roll-up of its ad technology, data and consumer insights capabilities into a single suite of capabilities.

Peterson reports to Adam Gerhart, US CEO, Mindshare and Susan Schiekofer, chief digital investment officer, GroupM. She joins the agency from Interpublic Group’s Initiative, where she served as managing director of investment and was responsible for investment across all media channels.

Prior to Initiative, Peterson held management roles at MRY, Publicis and Carat.

“Christine’s expertise will bolster the innovation and creativity of Mindshare’s digital investment in the U.S. and I look forward to close collaboration with her as part of GroupM’s larger digital investment organization,” stated Schiekofer.