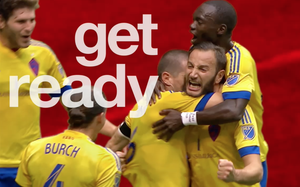 Five months after the departure of Jeff Jones to Uber, Target has named a new EVP/CMO, promoting Rick Gomez.

The Minneapolis-based retailer says Gomez will be in charge of brand positioning, and leading marketing, media strategy, creative, research, loyalty and corporate communications. Formerly SVP of marketing, Gomez, who has been with Target since 2013, now reports CEO Brian Cornell. He is also joining the chain’s leadership team.

Target also just announced its biggest push ever into team sports, with several soccer deals. It is set to become an Official Partner of Major League Soccer, with an arrangement that includes airtime during broadcasts on ESPN, Univision, and FOX Sports, in-stadium experiences, and “ownership of certain major MLS platforms, which will be unveiled at a later date.”

And in support of the home team, it has also signed on to become the official jersey sponsor of Minnesota United FC, which will sport the bullseye Target logo on uniforms as they join MLS this year.

Target has also become the Official Retailer of US Youth Soccer, which involves some three million players ages 5 to 19, as well as 900,000 coaches, volunteers and administrators. It also will be the presenting sponsor of the Target United Cup, which it says is the country’s largest recreational soccer tournament.

Target’s move comes at a time when it is increasingly counting on parents as a key element of its turnaround, launching private-label lines like Cat & Jack apparel and Pillowfort furnishings as a way to lock in loyalty.

Sales in kids' and other signature departments of Target did well over the November and December holiday period, but not well enough. The company warned investors not to expect good news next month when it releases quarterly earnings, with comparable-store sales dropping 1.3%. (In-store sales fell 3%, while digital revenues jumped 30%.)

"While we were pleased with Black Friday sales, December digital sales growth of more than 40% and continued strength in our signature categories, these results were offset by early season sales softness and disappointing traffic and sales trends in our stores," said CEO Brian Cornell, in its statement.

Electronics were especially weak, with results dropping in the high single digit range, while sales of food and essentials slipped in the low single-digit range.