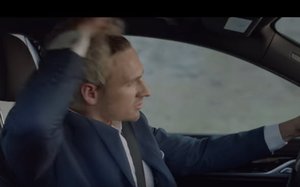 After the scandal over his exaggerated account of being robbed during the summer Olympics in Rio, it appears that Olympic gold medalist Ryan Lochte is not in great demand as a brand rep.

Following the Games, it was estimated that he lost about $1 million combined when he was dropped or not renewed as a spokesperson by Speedo USA, Ralph Lauren, Airweave and Syneron Candela.

However, he was quickly picked up by cough drop brand Pine Brothers, for a print campaign taglined: “Pine Brothers Softish Throat Drops: Forgiving on Your Throat.”

And now, he has been tapped by PowerBar for another campaign that references the incident at the Games but stresses redemption. This one is themed “Clean Start.”

PowerBar, which helped pioneer the energy bar category three decades ago, is debuting this first multichannel campaign in a decade to support the launch of its Clean Whey Bars, which contain no artificial flavors, colors or sweeteners.

The campaign, from lead creative agency and PowerBar AOR BSSP (Sausalito, California), is focused on a year-long Clean Start Pledge intended to “inspire and motivate everyone to move forward from the past and better themselves in 2017,” says the brand.

Lochte is featured in a 60-second anthem video (below) and 30- and 15-second versions.

The video starts out tongue-in-cheek, as Lochte appears to peel off the distinctive white hair look he sported at the Games, to unveil a notably traditional, plain-brown cut (shown above). The mood turns more serious as the athlete promotes the new bar line while declaring his own determination to wipe away the past and start clean in 2017.

The video ends by driving viewers to visit a campaign microsite to make the Clean Start Pledge and qualify to receive one of the more than 500,000 sample Clean Whey Protein Bars that will be given out by the brand.

“The idea behind the Clean Start pledge is that every day is a new one and provides an opportunity to make better decisions and recommit yourself to improvement through the joy of sport,” Doug Cornille, VP of marketing for PowerBar parent Premier Nutrition, tells Marketing Daily. “At PowerBar, we recommitted ourselves to creating clean and delicious foods and drinks to aid in performance. We knew Ryan was also making new commitments and starting fresh in his life. Together, we hope to inspire everyone to move beyond the past and commit to being better every day.”

It’s kicking off with a home page takeover on Bleacher Report, featuring the new Lochte video; targeted pre-roll on Mashable, ESPN, Hulu, YouTube, BuzzFeed; and a video buy in the MyFitnessPal app.

Following those efforts, social influencers — including “all 100 members of Team PowerBar” — will share their own “clean start” stories on social media and document their progress throughout the year.