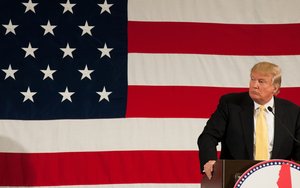 President-elect Donald Trump will get his own news media channel after all.

Financial content publisher Investopedia, owned by IAC/InterActive Corp, is starting a financial news microsite called, The Trump Economy, which focuses on the new president and his future administration's impact on investors' money.

Before the election in November, many predicted a Trump loss would not end his national media efforts. It was believed that he would turn his high U.S. consumer awareness into creating a media organization, perhaps a cable news network.

Since the election in early November, stock market indices have steadily climbed -- but have but leveled off in recent weeks. The Dow Jones Industrial Index is 8% to 19,804 as of January 18 -- with financial stocks 15% higher.

The company says Trump's overall approval rating on Investopedia.com is currently 44%. Other recent polls have shown Trump’s approval rating somewhat lower. A Quinnipiac University Poll released Tuesday show Trump at 37% -- one of the lowest ratings ever for an incoming president.