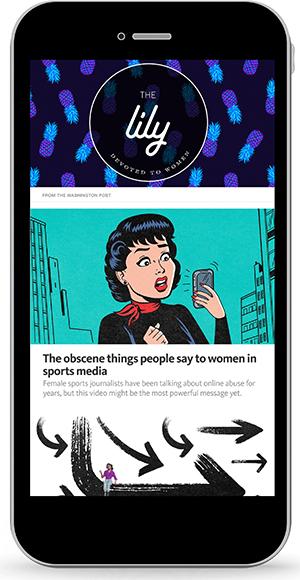 The Washington Post plans to launch later this year The Lily, an “experimental, visually-driven product" focused on millennial women.

The project comes from WaPo’s Emerging News Product team and will focus on “platform-specific storytelling” to inform and entertain young women. When it launches, The Lily will be on Medium, Facebook and Instagram.

Stories and columns will focus on issues like gender equality and women’s health. It will also produce a twice-weekly newsletter. The Lily will also feature contributed stories from influential people.

“This is a first-of-its-kind initiative for The Post which pulls content together in a way we don’t naturally do on our site,” stated Tracy Grant, deputy managing editor.

She added launching a different brand gives The Lily freedom to experiment and develop its own voice. The brand will have its own dedicated staff.

Grant suggested that the goal is to "see if we can capture a new audience we wouldn’t otherwise have," noting the initiative could be a model for how WaPo content is distributed in future.

The project will package content "relevant to all aspects of women’s lives,” stated Amy King, editor of The Lily, that can be shared on platform and “foster community.”

“The Lily” name is a reference to the first newspaper for and run by women, established in 1849.

The New York Times has had success with its recent extensions like Cooking and Watching, and it is likely WaPo is aiming for similar results.
mobile, newspapers, social media, women
Next story loading