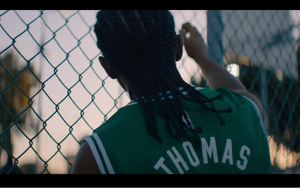 The NBA is launching a TV spot featuring Isaiah Thomas of the Boston Celtics.

The spot, created by Translation, is called “Isaiah Thomas: Possible.” It is the latest spot in the “This Is Why We Play” campaign. The 5-foot 9-inch guard was the last pick in the 2011 draft, but since then he has given his critics pause.

Demonstrating the many ways in which basketball is a microcosm of life, each installment of the NBA’ “Player Stories” explains the personal journeys of players in the league and their experiences that drive them to perform at the highest level.

Previous spots include “29,” featuring Cleveland Cavaliers and NBA Champion Kyrie Irving; and "The Show" starring Damian Lillard of the Portland Trail Blazers. “This Is Why We Play” aims to engage existing NBA fans and create new ones by exploring the emotions behind basketball’s universal appeal, according to the organization.

In "Isaiah Thomas: Possible," Thomas tells the story of how he was constantly doubted all throughout his life. However, basketball was where his dream could be made possible, and a place to prove the naysayers wrong.

On Thursday, Thomas lost a tie-breaker for a spot on the Eastern Conference All-Star Team after winning the media vote. Thomas leads the East in scoring and is fourth in the NBA, averaging 28.7 points per game.

The spot premieres January 21 during the Cleveland Cavaliers vs. San Antonio Spurs game at 8:30 p.m. ET on ABC. The spot will also air online and across all NBA platforms.