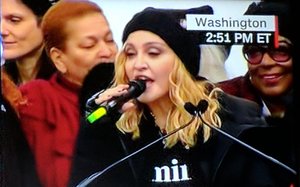 A minute into a live telecast of her address at the women’s march in Washington, D.C., Madonna began dropping the F bomb, and it took two more minutes and as many more F bombs, before CNN cut her off to begin analyzing her message.

“It took this horrific moment of darkness to wake us the fuck up,” Madonna said seconds into the live telecast. “It seems as if we have all fallen into a false sense of comfort. That justice would prevail and that goodness would win in the end. Well, good did not win this election. But good will win in the end. So what today means is that we are far from the end. Today marks the beginning of our story. The revolution starts here.

“The fight for the right to be free -- to be who we are -- to be equal. Let’s march together through this darkness and with each step, know that we are not afraid. That we are not alone. That we will not back down. That there is power in our unity. And that no opposing force stands a chance in the face of true solidarity. And to our detractors that insist that this march will never add up to anything, fuck you. Fuck you! It is the beginning of much needed change…,” she continued until CNN anchor Brooke Baldwin cut in.

Madonna, audio fading out: “...change that will require sacrifice…”

Baldwin: “Okay, we’re going to hold onto that, because… some of the language used...  it’s Madonna… the one and only Material Girl up on stage... I spy Amy Schumer over her shoulder…”

“It’s a show of force with all these celebrities. We heard Donald Trump say, ‘I don’t need the celebrities, I won the election,’ but what do you make of her message?,” Baldwin continued, turning to her CNN colleagues, who demurred from explicitly interpreting what Madonna’s exact message was. 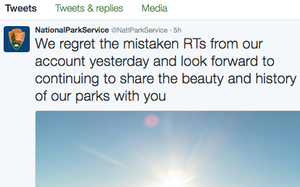 After retweeting a New York Times story about the lackluster turnout for Trump’s inauguration parade vs. Obama’s previous ones, the National Parks Service -- which is responsible for knowing how many people actually participated -- was reprimanded by the White House, had its Twitter account temporarily shut down, and forced to tweet an apology.

The episode was both ironic and symbolic, because the White House was saying it's not appropriate for federal employees to express themselves on Twitter.