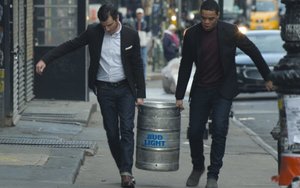 It’s not the Super Bowl ad, but Bud Light is offering a preview of sorts by airing the first ad in its new campaign, “Famous Among Friends,” before the big game.

Anheuser-Busch InBev’s new U.S. Marketing VP Marcel Marcondes revealed the theme of Bud Light’s new campaign in a press briefing last week in which he also revealed A-B InBev’s Super Bowl LI buy. Bud Light and Bud will each have one 60-second spot, and Busch and Michelob Ultra will each have one 30-second spot. One ad will air per quarter. A-B InBev has exclusive Super Bowl commercials rights in the beer category.

Last week, Marcondes indicated that it has not yet been determined whether some of the new Bud Light creative would debut prior to the Super Bowl.

On Sunday (Jan. 22), football fans got the answer: The first Bud Light ad in the new, long-term creative platform ended up running during the NFC and AFC Championship Games — the most-watched sports programs of the year, after the Super Bowl itself.

The 60-second “Between Friends” spot (below) shows a Millennial guy awkwardly doing a best-man toast at his best buddy’s wedding, followed by several flash-back moments in which the same guy is also pattering awkwardly, as that best buddy patiently, and mutely, listens.

The new Bud Light ads — which seek to celebrate the value of building friendships over Bud Light — go back to the brand’s creative roots of “bringing people together,” and epitomize the more down-to-earth approach that will be used for all of A-B InBev’s brands going forward, as described by Marcondes.

In late October, A-B InBev reported a disappointing third quarter — including a decline in sales to retailers for Bud Light — and cut its full-year forecast. Soon after, the brand announced that it had discontinued the “Party” campaign ads, weeks before the campaign had originally been slated to end.