With New CEO Aboard, Mattel Aims Barbie At Dads 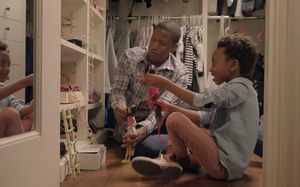 Wondering how sincere Mattel is in its effort to shake things up? In recent days, it has hired Margaret Georgiadis, president of Alphabet’s Google unit, as its new CEO. And it’s rolling out an entirely new marketing effort for its bouncing-back Barbie, targeting dads as key players in their daughters’ Barbie-fueled make-believe.

Citing Georgiadis’ skill and “deep understanding of how to build and scale brands on a global basis … effectively engaging consumers and retail partners in a rapidly evolving digital world,” the El Segundo, California-based toy company says she starts early next month and replaces Christopher A. Sinclair, who rises to executive chairman of the board. Recently, Mattel has been steadily adding tech to its offerings, including virtual reality and IoT dollhouses.

And its new ad campaign, from BBDO San Francisco, continues the ongoing "You Can Be Anything" theme. But these ads, which broke during National Football League games, showcase real dads playing Barbie with real daughters. Urging dads to turn halftime into playtime, the dads are treated by Barbie the doctor, rescued by Barbie the firefighter, assisted by Barbie the yoga teacher and instructed by Barbie the astronaut. (Ads are similar to Procter & Gamble’s Super Bowl effort last year, promoting its Pantene brand with NFL stars giving their daughters Dad-dos.)

Each spot ends with the same line: "Time spent in her imaginary world is an investment in her real world." The company says it based the new initiative on research that girls who have loving, supportive relationships with fathers are more likely to be self-confident and self-reliant as they grow up.

Mattel says it is the first time the company is backing Barbie with TV advertising during the spring, and that it will continue throughout the year, supported by social, digital and marketing initiatives with Social Native, Tongal and Time. And it’s using a #DadsWhoPlayBarbie hashtag to get consumers to share their own stories.

Barbie has certainly had her ups and downs over the years, with Mattel struggling to keep the brand relevant to young families, not just in the U.S. but also around the world. But in its most recent quarterly results, it says worldwide sales for the Barbie brand shot up 16% (17% in constant currency) from the prior year.

The company is scheduled to release its next quarterly report later this month, but analysts from Barclays, which kept a sharp eye on toy companies over the holiday, lowered its estimates for sales and earnings estimates for both Mattel and rival Hasbro, citing the strengthening dollar and rising fuel costs. But it says its spot checks, which included a dozen stores in the metropolitan New York area, found that sales of Barbie “seemed to improve through the holiday.”

campaigns
2 comments about "With New CEO Aboard, Mattel Aims Barbie At Dads".
Check to receive email when comments are posted.
Read more comments >
Next story loading