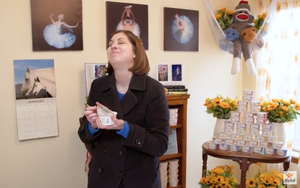 General Mills, which has been reformulating existing products and releasing new ones in a push to turn around its lagging U.S. yogurt business, has just officially launched three new Yoplait products.

The updated line is meant to recreate the taste and texture that Millennials, in particular, loved when they were kids while reflecting their nutritional expectations as adults. The revised, "clean" line is made with whole milk, and it’s free of artificial ingredients and high fructose corn syrup (HFCS).

General Mills, which says that it revived the line in response to persistent pleas from those nostalgic Millennials and other consumers, is promoting the relaunch partly through a video (below) that captures a surprise it staged for one of those fans.

Last May, Whitney Thomson tweeted: “my childhood died with the disappearance of Yoplait Custard Style tbh.” So, with the help of her family, the brand recreated her childhood bedroom — with the addition of scores of containers of the new custard yogurt.

Yoplait Custard, which comes in multiple flavors, is also being promoted through an insert added to a Yoplait branding TV ad that debuted last June. In this version of “Synchronicity,” in which a father and daughter enjoy a late-night yogurt snack together, the little girl whispers “Pssst — Yoplait Custard’s back!,” as an image of the custard product briefly appears.

In addition, hoping to reignite interest in light yogurts, whose sales have been declining for some time now, Yoplait has replaced Greek 100 with a high-protein version.

Yoplait Greek 100 Protein, with 14 to 15 grams of protein but still 100 calories, is thicker, and -- with the exception of the artificial sweetener sucralose -- is also free of artificial ingredients (and HFCS), according to General Mills.

It’s being promoted with a new 15-second TV spot and a social media and influencer program dubbed #LiveFull, which will offer tips and tools for a healthier lifestyle (and engagement devices like inspirational shareable, printable notes) throughout the year.

The third recent product launch is Yoplait Dippers snacks — yogurt with a crunchy coating, in a package that allows for eating sans spoon.