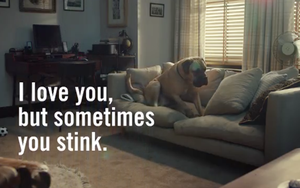 As the J. Geils Band once put it, “Love stinks.” In a new campaign for its Febreze air freshener brand, Procter & Gamble takes that sentiment literally.

In a campaign launching this week, the brand pays homage to odor-carrying items around the house, noting that we may love them, but sometimes they stink. One commercial (from Grey) is a love letter to a couch.

A voiceover from actress Kathryn Hahn notes the couch gives “comfort” while its owners give it “bare feet, back sweat” and a place for a large dog’s “everything.” The spot then shifts to a man spraying the couch with Febreze because: “The things you love the most can stink.”

The campaign will receive a high-profile showcase in February, as the brand will air a commercial during the Super Bowl. The spot, which will air during the second quarter, will pay homage to the bathroom (per a teaser spot), and is part of the brand’s promotion of the “Halftime Bathroom Break” along with sister-brand, Charmin.

“The [bathroom break] idea came from the consumer-driven insight that bathroom usage spikes at halftime during the Super Bowl,” Martin Hettich, vice president of P&G Home Care North America and brand franchise leader for Global Air Care, tells Marketing Daily. “We learned that 50% of people spend little to no time prepping their bathroom and most (62%) say they are most likely to forget bathroom supplies when prepping for a Super Bowl party.”

In addition to the Febreze spot, the bathroom break promotion will involve heavy PR during the run-up to the game, utilizing author and lifestyle blogger Katherine Schwarzenegger and NFL stars Josh Norman to remind consumers to make sure they’ve got enough of the right bathroom supplies before the big game.

“[They] will serve as brand spokespersons, reminding football fans everywhere the importance of being ready for impending Halftime Bathroom Break,” Hettich says.