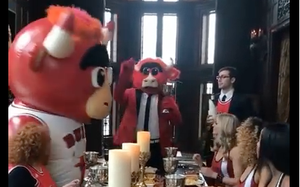 The Chicago Bulls debuted a Snapchat short film based on the game/movie “Clue.”

“The Mystery” was shown on Snapchat on Jan. 23 at the team’s account @ChicagoBulls and also is on YouTube. The team plans to do more films like this in the future, says Luka Dukich, Chicago Bulls digital content manager.

The Bulls, who won the NBA Team Digital Content of the Year Award last season, experiment constantly with new ways to engage their global audience, he says.

“With all of our social content, we think it’s important to be consistently innovating and giving people something interesting they haven’t seen before,” Dukich tells Marketing Daily.

At the beginning of this season, the team had the idea to do a narrative-form story filmed entirely within Snapchat.

“We tested it right before opening night with a short film showing Benny the Bull getting in shape for the upcoming season, and it seemed to have a positive response, so we got to work cooking up more ambitious short film ideas,” Dukich says. “This one was the first of those bigger ideas.”

Dukich says doing a short film entirely on Snapchat was risky because it was unknown how consumers would react.

“But it seems like the response has been overwhelmingly positive,” he says. “The Snapchat messages, tweets and other feedback from our colleagues in the sports industry has been crazy positive as well.”

About 55,000 people watched the four-minute film over the course of 30 snaps, he says.

“Obviously, a Snapchat story can’t ‘go viral’ and get millions of views for a single video, and in fact it can only live for 24 hours, but we feel like we engaged our audience on there in a way we haven’t before, and they appreciated it and responded accordingly,” Dukich says.

The audience for the film was worldwide.

“A large percentage of our audience comes from overseas and we saw people from France to Brazil send us excited, positive messages about this story,” he says.

The film was created in-house with help from the team’s sponsor, BMO Harris Bank.

“We also teamed up with The Second City here in Chicago, and they provided us with some help with some of the comedic bits and also provided two actors [the butler and swingin’ senior],” Dukich says.

“We have so many avenues to create and so many different ways to do it, that the only limit is your own imagination," he says.

“But we wanted to continue to engage a fast-growing, young audience on Snapchat and give them something they didn’t expect and hadn’t seen before,” he says.