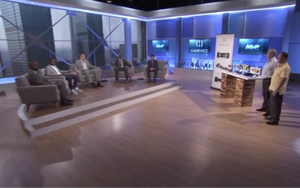 Injured tight end Rob Gronkowski may not be playing in Super Bowl LI with the New England Patriots, but that doesn’t mean he is sitting idly by on the sidelines.

Gronkowski will star in a new series launching Wednesday on Verizon’s go90 digital platform, “MVP” — which in this case stands for “Most Valuable Partner” — a theme similar to “Shark Tank,” in which entrepreneurs pitch their products or concepts and seek endorsements (and some financial backing) from top-name athletes.

A financial expert is also part of the panel.

“MVP” will consist of 18 10-12-minute episodes breaking each Wednesday, each featuring people who display their product and share what they seek from an athlete endorser. The panel then gets to question the presenter, ultimately striking a deal or sending the guest home empty-handed.

According to the promo spot, “these entrepreneurs might have new, game-changing ideas, but they need to land a brand ambassador to really take off. And with the right pitch and the right offer, these pros might just become their most valuable partner.”

Among the ideas presented to Gronkowski and friends are the Man Crate (filled with “man-cave-type items” that are shipped to someone’s home), GameVice (a mobile interactive game controller) and Buiced (“spelled like juiced, pronounced like boost”) energy drink.

Shica Little, who has a Ph.D. from Clemson in organizational leadership, developed Incredi-Whip, which she described to the panel as an all-organic product that can be used as a coffee creamer or dessert topping (or just squirted into your mouth, as Durant does). Spoiler alert: The product, which launched in October and is in the refrigerated aisle of such retailers as Walmart and Kroger, will be endorsed by a member of the panel.

Verizon’s go90 streaming service launched in October 2015 and has aired such shows as “The Runner” from producers Ben Affleck and Matt Damon, “The Big Papi Network” with David Ortiz and Gronkowski’s free-form “Uninterrupted.”

It offers a free subscription to NBA League Pass via Verizon’s official alliance with the league, as well as other sports and live concerts. It also features content from the likes of Vice, BuzzFeed Comedy and Awesomeness TV.

Next month, go90 will debut “QB1: Beyond The Lights” from Peter Berg (director of “Friday Night Lights”), a ten-part series that will follow three high school quarterbacks in their senior year as they prepare for college football.

The platform is currently undergoing internal changes, including laying off some 150 employees.

Verizon is in the process of acquiring Yahoo as part of a $4.8 billion deal.