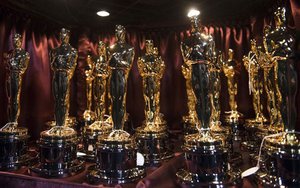 Nine movies nominated for the Oscar Best Picture award on Tuesday have spent a total of $124.29 million in national TV spending so far -- averaging $13.9 million per movie, according to iSpot.tv -- down slightly from a year ago.

Paramount’s “Arrival” came in at $19.1 million in national TV spending. To date, it has produced the largest U.S. box office revenue results of any Best Picture nominee, at $95.7 million.

Lionsgate’s “La La Land” is at $17 million in national TV. Currently, it is in second place in U.S. box office among the nine nominated movies, totaling $89.9 million.

Overall “La La Land” tallied the most Oscar nomination when looking at all award categories, with 14, followed by “Arrival” with eight. “Moonlight,” "Lion," "Hacksaw Ridge" and “Manchester by the Sea” each had 6; “Fences” and “Hell or High Water” claimed four each.