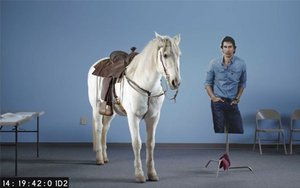 Snickers, the Mars candy bar, is airing a live ad during the Super Bowl, said to be a first for the big game.

The ad will be created by BBDO New York and performed and broadcast during the first commercial break of the third quarter. It stars actor Adam Driver.

The brand released a ‘"sneak peek" of what fans and viewers can expect when the ad is produced at the game, via a series of four trailers it put on YouTube today.

"Every year, we challenge ourselves to find new ways to satisfy our fans hunger for entertainment by delivering something new and breakthrough. And there is no better way than being the first to have a Super Bowl live ad," said Allison Miazga-Bedrick, Snickers brand director.

In addition to the live ad, the brand is also streaming 30 hours of original content leading up to the Super Bowl. That content will be streamed from the set of the live commercial and can be accessed at SNICKERSLIVE.com, as well as the Snickers Facebook page beginning Thursday, February 2, 2017 at 12:00 p.m. ET.

The live stream will feature a variety of content themes, as well as celebrity and social influencer appearances.

Beyond the live stream event, the brand will continue to stream live content on its social pages and SNICKERSLIVE.com before, during and after the game on Sunday.

The new spot marks the third consecutive year Snickers will advertise during the Super Bowl, and the brand's sixth appearance overall. It is designed to reinforce the brand’s “hunger satisfaction” positioning.

At least one other advertiser — Hyundai — is shooting footage at the game for a commercial. However, its spot won't air live, but will be edited quickly in time for the “post gun” slot, which is the first commercial break after the conclusion of the game but before the trophy ceremony.

The car maker describes the ad as a “90-second documentary” shot during the game that will “capture some of the best off-the-field Super Bowl moments.”

Hyundai aired two teasers during the AFC and NFC Championship games featuring NFL Legends Joe Montana and Mike Singletary that hinted at what the “post gun” commercial will be about.