In A World Where All Young Viewers Hate Trump, 'SNL' Plays It Safe 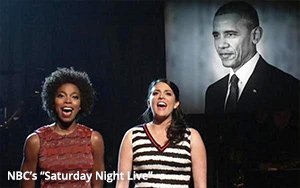 Maybe the headline here is slightly exaggerated. After all, you do see many young faces in the crowds of Trump supporters -- most recently in the crowd shots seen during his inaugural last Friday.

So maybe not all young people hate Trump. But the ones who like Trump are not important to “Saturday Night Live.” The show is much more interested in the millions of young adult urbanites (and anyone else) who have banded together in the unity of their Trump hatred.

The despair of this group in the wake of Trump’s victory over Hillary Clinton has not abated since Election Day, and “Saturday Night Live” is there to offer them comfort like the teddy bears you see some Millennials clutching these days.

I kid you not -- I have actually seen enough young adults (young women, that is) hugging teddy bears lately that I have to conclude that this is actually a social trend now. Is this true, Teddy Bear marketers?

You can hardly blame “SNL” for aiming its relentless anti-Trump satire at these eager residents of Teddy Bear Nation. TV shows tend to succeed based on their affinity with their audiences.

And let's face it -- Donald Trump is an easy target for TV comedy and satire. To be fair, so were Bill Clinton and George W. Bush during their presidencies. But as time goes on, the sheer tonnage of anti-Trump satire on “SNL” and the weekday late-night shows might prove to be larger than the Clinton and Bush eras combined.

It's a safe bet that “SNL” will continue to hammer away at Trump, and along with him, such ancillary figures as Kellyanne Conway and Vladimir Putin. Last weekend’s “SNL,” guest-hosted by comedian Aziz Ansari, was a timely example.

Coming the day after Trump was inaugurated, “SNL” had its own welcome for Trump and company. It started with a “cold open” featuring a shirtless Putin (played by Beck Bennett) addressing the U.S. in a televised speech.

But the most elaborate piece seen on the show was a full-scale musical number called “Conway!” inspired by the musical “Chicago.” It had Kate McKinnon as Conway giving a song-and-dance explanation for why she joined the Trump team. Whether you love or hate Kellyanne Conway, this bit was a season highlight for “SNL,” due in large part to McKinnon's performance.

In another segment that was sure to bring tears to the eyes of the teddy-bear huggers, Cicely Strong and Sasheer Zamata sang a duet of “To Sir With Love” while a black-and-white photo of Barack Obama loomed in the background (pictured above).

The song is from the 1967 film of the same name starring Sidney Poitier as a black teacher in a London secondary school filled with working-class white toughs.

Whether or not you loved Barack Obama as much as the teddy bear clutching masses or the cast members of “SNL,” it is still possible to applaud the creativity that went into choosing this song plucked from relative obscurity to give President Obama an “SNL” sendoff. It is a lulu of a performance.

politics, tv
5 comments about "In A World Where All Young Viewers Hate Trump, 'SNL' Plays It Safe ".
Check to receive email when comments are posted.
Read more comments >
Next story loading