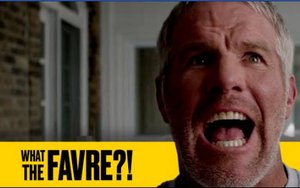 The campaign, “What the Favre?!,” seeks to engage fans and reinforce “B-Dubs” as the place to watch and experience the Super Bowl, by suggesting a possible element of the supernatural on the gridiron. Space150 is the lead creative agency.

The creative keys off of a brand phenomenon: For years, sports fans, and even athletes have figuratively pointed a finger at Buffalo Wild Wings on social media when unexplained events or an unseen force occurs during a big game — asking B-Dubs to “#HitTheButton” to influence the outcome.

Last year, for instance, the brand saw more than 12,000 social interactions from fans calling it out, asking for help, or complaining about outcomes during games.

Leading up to Super Bowl LI, B-Dubs is teasing fans with the idea that they actually might be able to influence games.

The tongue-in-cheek campaign includes a 30-second TV spot, aired before the NFC Championship game, in which Favre, in flashbacks, expresses bewilderment at why so many of his passes were intercepted. (He holds the NFL record for interceptions, at 335 — albeit out of 10,000-plus career passes.)

A hint of what may have been “to blame” comes when two pale-skinned guys in fedoras drive up in a vintage black car and say they’ would like to talk to him.

That ad was followed by a video (“Marionette,” below), showing those same mysterious “G-men” types using a touchpad and a system that somehow forces him to perform karate moves, dance “the robot,” and awkwardly throw a football left-handed.

The video and TV ad, posted around the championship games weekend on B-Dubs’ and Favre’s social channels and tagged with #HitTheButton, look to be generating substantial social action in their first few days. The ad will also run on digital media through Jan. 31.

Over the next two weeks, Favre will continue to share new “evidence” that B-Dubs somehow tried to tarnish his legacy. Some of his friends from the NFL, including Dallas Cowboys quarterback Dak Prescott, will join the conversation, according to B-Dubs.

On Jan. 31, a long-form video showing more of Favre’s journey to uncover the truth will be posted on social channels.

The campaign will culminate with a second 30-second TV spot. The ad, a condensed version of the long-form video, will air on the Fox Super Bowl Pregame Show, between 5 and 5:30 EST.

That second ad will also be released online prior to game day—likely a day or two after the release of the long-form video, a B-Dubs rep reports.