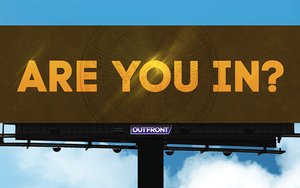 Atlanta Football Host Committee (AFHC) is partnering with Outfront Media to develop and design the organization’s “I’m In” campaign tied to Atlanta winning the bid to host the 2018 College Football Playoff National Championship. AFHC is the first host committee to advertise for the College Football Playoff National Championship game for a full calendar year.

Outfront Media’s in-house creative unit, Outfront Studios is responsible for conceptualizing, creating, and developing the out-of-home campaign that aims to build awareness for Atlanta being named host city for the event, set for January 8, 2018.

The concept is designed to unite the Atlanta community, thanking everyone who was a part of making the city the game’s host, and preparing for the attention leading up to the game.

Ten static billboards were transitioned from the "ARE YOU IN?" creative to "I'M IN" after a reveal event on Tuesday, January 24. Throughout the coming year, the boards will use digital and static messages to showcase two local Atlanta personalities each month, including Atlanta singer like Zac Brown, as well as local teachers, students, and business leaders.

“Our goal for the ‘I’m In’ program was to create a sustainable campaign that could attract national attention all year long, but also tie into our local roots," says  Dan Corso, President of the Atlanta Sports Council, part of the AFHC. "The creative highlights how everyone came together - both well-known Atlanta stars and those playing pivotal behind-the-scenes roles - all to make the 2018 College Football Playoff National Championship the best experience yet.”