Hidden Valley Gets Real In First Positioning Shift In A Decade 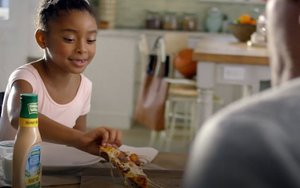 The thrust was to differentiate Hidden Valley as the original ranch brand, with unique taste: "The Way Ranch is Supposed to Taste."

Now, the brand is launching its first new brand marketing platform/positioning in more than a decade, working with Dentsu Aegis. Dentsu became creative agency of record for Hidden Valley and KC Masterpiece in mid-2016, when parent Clorox Co. parted ways with its AOR of nearly 20 years, DDB. (Non-food brands went to FCB and McGarryBowen.)

The new Hidden Valley platform, “Ranch Out” — a play on “branch out” — reflects the reality that many consumers are already using the brand’s various flavors of bottled ranch dressings in a variety of nontraditional ways, and aims to accelerate sales growth by inspiring more to do the same, Steinbach tells Marketing Daily.

“We realized that for us to connect with today’s consumers and grow the brand more quickly, we needed to bring Hidden Valley to life in our advertising in a way that was more modern and relatable and reflects how people are using the product today,” he sums up.

“There’s been no shortage of [marketing and advertising] spending” for Hidden Valley, he says. “Historically, the brand has always had the largest share of voice in terms of advertising and promotion within the dressings category. But we’re changing how we use the dollars.”

The Clorox Co.’s latest annual report noted that the introduction in its fiscal 2015 of new ranch varieties including buffalo, cilantro lime, honey BBQ and sriracha (which are known to be Millennial-friendly flavors) helped drive double-digit sales growth for the brand within the flavored ranch segment during fiscal year 2016. The report also said that Hidden Valley was one of the key brands receiving increased marketing investment.

The campaign is kicking off with a 30-second anthem video (below) that shows families and consumers of all ages using Hidden Valley dressings on a wide variety of foods at an outdoor party. The video pulled “the highest persuasion scores we’d ever seen,” reports Steinbach.

While Hidden Valley’s advertising needs to appeal to consumers across age ranges and lifestyles, in line with the core target audience, the first of several 15-second TV spots to come this year shows a family adding the dressings to pizza slices for a fast dinner on a busy evening (above).
The creative’s tagline: “It’s time to ranch out with the original, Hidden Valley Ranch.”

In addition to television and banners and other paid digital advertising, the brand will over the next 12 months be employing magazine ads, video and other content through influencers and social media (using #RanchOut to drive conversation), digital and traditional FSIs, PR, and a “significant” in-store component, reports Steinbach. The last will include in-store signage and shelf-talkers, and shopper marketing programs including partnerships with incentive programs such as Shopkick, Ibotta and Coupons.com.

Offering more specifics, Steinbach says that what amounts to an “equity repositioning” for the bottled line — which accounts for about 80% of Hidden Valley’s sales — was driven by the brand’s recognition, through monitoring social media and conducting research, that most (9 out of 10, in fact) of its purchasers were already using Hidden Valley on foods other than salad.

Sales for the overall shelf-stable salad dressings and the broader condiments, dressings and marinades category have been essentially flat since 2013, at about $9.6 billion, according to Mintel, SpecialtyFood.com reported last year. Due in part to growing competition from ethnic sauces and dips, food and retail sales agency Harvest Group has projected total salad dressing growth over the next five years at just 0.5%. But while refrigerated salad dressings saw sales increase by more than $20 million in the 52 weeks ending Oct. 4, 2015, sales for shelf-stable varieties declined by about the same amount, per IRI data.

Despite these trends, ranch dressings as a whole have continued to prosper due to the flavor’s broad appeal and versatility —including parents’ penchant for using it to get kids to eat vegetables. NPD reports that in the U.S., ranch is the salad dressing flavor chosen 40% of the time. And many makers of traditional ranch flavors are finding success with expanding into those more adventurous, international and ethnically influenced ranch-plus flavors.

Steinbach confirms that Hidden Valley, the leading brand, has continued to acquire new households and see sales and market-share growth. But achieving the goal of faster sales growth is challenging for a mature brand, he adds. (Stastica estimates that 8.93 million U.S. consumers used three or more bottles of its prepared Hidden Valley dressings last year.)

Next Up: A ‘Clean’ Ranch Line

Hidden Valley is also in the process of launching a “clean” line, with no artificial flavors or preservatives, called Hidden Valley Simply Ranch.

The new products are being rolled out to retailers now, and an ad campaign, currently in development, will launch in April, reports Steinbach.

Salad dressings are by no means immune to the “free-from” drivers reshaping the food industry. Various researchers have confirmed that claims that consumers equate with “fresh and healthy” — including no artificial ingredients, as well as organic and gluten-free — are now key purchase motivators for the dressings category. Indeed, they are behind the significant sales growth being seen in refrigerated dressings.