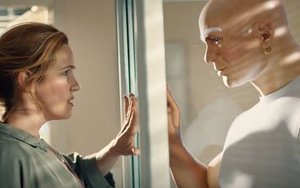 Maybe there's a little Mr. Clean in all men. In his first Super Bowl appearance, the brand icon dances his way into a woman’s heart (and bed?) by just being himself.

In the new spot (from Leo Burnett Toronto), the buff, bald cartoon struts sexily throughout a house, drawing the attention of a woman in the kitchen. The two move throughout the house, cleaning in sexy unison (e.g., slowly wiping opposite sides of a shower door) to a soulful track.

As they finish their dance, the cartoon turns into to a real (albeit schlubbier) man, whom the woman tackles in a romantic embrace. The spot concludes with the message: “You gotta love a man who cleans.”

The appearance on the world’s largest advertising stage continues a rebirth for the brand icon. Last year, the company reintroduced the brand’s jingle to a new generation of consumers. The new commercial is intended to rejuvenate Mr. Clean in the eyes of younger consumers, says Martin Hettich, vice president of Home Care North America and Brand Franchise Leader for Global Air Care at Procter & Gamble.

“There’s a whole new generation of cleaning consumers who didn’t grow up with Mr. Clean and might not even know the brand exists,” Hettich tells Marketing Daily. “What better venue that the largest co-ed viewing audience of the year, to introduce them to the man and the brand.”

Creating a spot for the Super Bowl is more pressure-filled than coming up with another iteration for a campaign, admits Heather Chambers, SVP creative director, Leo Burnett Toronto. “The investment is greater so you want the payout to be greater,” she says. “It’s a very competitive stage. And if you don’t stand out, entertain, and communicate meaningfully, you will hear about it in the press, on social media and from your peers.”

In addition to the spot, Mr. Clean parent Procter & Gamble has recruited Denver Broncos’ DeMarcus Ware Mr. Clean’s M.C.P. (Most Clean Player) to demonstrate to men how sexy they are when they clean. Ware will be appearing at Super Bowl events and elsewhere with the winner of the brand’s “Next Mr. Clean” contest to promote the spot, Hettich says. Consumers are also being encouraged to share photos of their favorite cleaners and tag #MrClean.

1 comment about "Mr. Clean Gets Fresh In Super Bowl Spot".
Check to receive email when comments are posted.
Next story loading