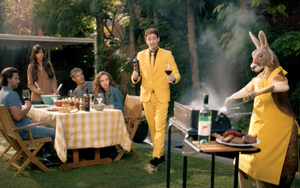 Yellow Tail will be the first wine brand to advertise on the Super Bowl in nearly 30 years.

To get around Anheuser-Busch’s lock on the alcohol category at this year’s game, the 15-year-old winemaker is buying local ads in 70 markets which will get it on the TV sets of about 85% of viewers, according to the company. It will air in the first half of the game in all major markets.

There has not been an ad from a wine brand since the '80s: Bartles & Jaymes (remember wine coolers?) ran a national ad in 1988 and Paul Masson Vineyards ran one in 1980, according to the company.

The 30-second spot, now up on YouTube, is the beginning of a three-year marketing campaign. Themed “Let’s Yellow Tail,” it introduces consumers to the brand’s first-ever spokesperson, “Yellow Tail Guy,” and his sidekick “Roo,” an animatronic kangaroo.

The spot features an appearance by supermodel Ellie Gonsalves. It was directed by Harald Zwart (2010’s Karate Kid with Jaden Smith and the current Capital One campaign with Alec Baldwin) and created by advertising agency Burns Group.

The campaign aims to show the fun side of wine, conveying that wine is approachable and can be enjoyed at any fun, casual occasion that’s appropriate for alcoholic beverages.

More and more people continue to reach for wine. Sales have grown every single year since 1995, and wine has steadily grown faster than beer for the past four years. Wine sales spike 9% in the week leading up to Super Bowl, and last year 30 million people — or one out of four viewers — served wine during the big game, according to Yellow Tail.

The campaign also will include in-store marketing, digital and online activations, social media and a consumer contest to win a trip to Australia.