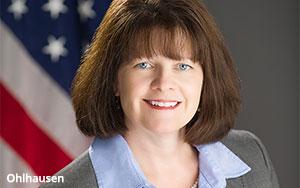 "I will work to protect all consumers from fraud, deception and unfair practices," Ohlhausen stated. "I will safeguard competition while preserving American innovation and promoting economic liberty for all citizens."

Silicon Valley billionaire Peter Thiel is heading the search for a more permanent FTC chair, according to BuzzFeed.

Ohlhausen, who became an FTC Commissioner in 2012, has voted with the agency's Democrats on many matters, but has also disagreed with them on some privacy controversies.

In 2015, Ohlhausen dissented from the decision to bring an enforcement action against analytics company Nomi Technologies, which tracks consumers in retail environments. That company allegedly failed to live up to a promise in its privacy policy, which said consumers could opt out of retail tracking “at any retailer using Nomi’s technology.”

Nomi didn't actually require its retail clients to disclose whether they used the technology, and most of its clients failed to do so, according to the FTC.

In her dissent, Ohlhausen said Nomi was “a young company that attempted to go above and beyond its legal obligation to protect consumers.” She also said the decision to prosecute Nomi could encourage other companies to “do only the bare minimum on privacy.”

Four years ago, Ohlhausen suggested that some of the FTC's privacy stances could disadvantage small companies.

She specifically questioned a 2012 report calling on the ad industry to develop a universal do-not-track tool, which would have allowed consumers to easily opt out of all online behavioral advertising.

“New privacy restrictions may have an effect on competition by favoring entrenched entities that already have information, over new entities,” she said at the time.