Trump Was Airtime Champion On Network News in '16: Study 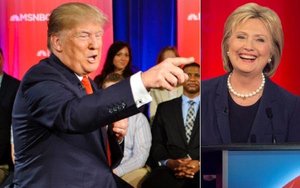 However, the Trump-Clinton contest received fewer minutes on the evening newscasts overall than the last non-incumbent race for president -- 2008's contest between Obama and John McCain, Tyndall noted.

“To contradict the hype: Campaign 2016 was not a blockbuster [on the network newscasts],” Tyndall writes. “The presidential race received the standard amount of coverage for a non-incumbent contest -- slightly less than in 2008, slightly more than in 2000 and in 1988. Nothing unusual.

“What was unusual,” he said, “was the coverage of Donald Trump -- with more than twice as much airtime as Hillary Clinton -- both unprecedented free publicity and unprecedented scrutiny."

Tyndall has spent many years tallying up the minutes expended annually on various topics on the three network newscasts. In this new study, he offers no opinion on whether, or how, the disparity in minutes devoted to Trump and Clinton may have affected the election's outcome, if at all.

Nor does this new study (which you can see on his Web site here) take into account all of the campaign coverage last year on CNN, Fox News Channel and MSNBC. It’s probably not possible for any one person to quantify all of that airtime.

It is strictly an assessment of the nightly, half-hour, weekday newscasts on the broadcast networks -- “The NBC Nightly News with Lester Holt,” “World News Tonight with David Muir” (ABC) and “The CBS Evening News with Scott Pelley.”

With all of the noise that emanates from the persistently yakky cable news channels, you might wonder whether a study of just these three half-hour network newscasts is meaningful. But a spot-check of the latest ratings for the three evening newscasts reveals that they still draw audiences that amount to millions of people -- many more millions, in fact, than the news channels attract for even their highest-rated shows.

Add them up and you get a staggering 26 million people watching these newscasts on average every night (although maybe there's some overlap here -- Nielsen households in which more than one of these newscasts is watched each night or on different nights). In addition, more than half of these viewers might be out of the demo (25-54) if I'm reading the demo data correctly. But that's a topic for another column.

Meanwhile, the numbers found by Tyndall are food for thought. According to his tally, Trump received 1,144 minutes of airtime on the three newscasts combined last year, compared to Clinton's 506 minutes (although our arithmetic puts this number at 507). The study takes no position on which portions of these minutes represent “positive” or “negative” stories.

The Trump and Clinton stories were Nos. 1 and 2 in the rankings of topics covered on the evening newscasts in 2016. Third was the Zika virus, with 255 minutes overall.

While Tyndall doesn't venture an opinion on the effect of the Trump-Clinton coverage disparity, he does draw a conclusion about the networks’ coverage of the Obama administration in its final year, based on the minutes devoted to various policy subjects -- both foreign and domestic.

“This was truly a lame-duck year for the Obama administration,” Tyndall writes, “with the least coverage of U.S. foreign policy in the 29-year history of this database, the least on the economy, and the third least on federal domestic policy. The D.C. bureaus at ABC and NBC have never received less airtime,” he said.

news, politics, tv
1 comment about "Trump Was Airtime Champion On Network News in '16: Study ".
Check to receive email when comments are posted.
Next story loading