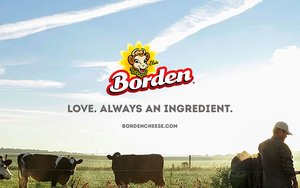 Borden Cheese is relaunching its brand for the first time in four years to better compete with widely-known and better-funded cheese brands Kraft and Sargento.

In the video, Martha shares a classic seasonal recipe - grilled cheese and tomato soup - using a variety of Borden Cheese products, the first time she has ever supported a cheese brand on her show. The event, which Steward also shared in a blog post, first aired Dec. 5 and has attracted 218k views and yielded over 10k interactions.

In addition, the campaign includes a series of online advertisements and six TV spots (served programmatically) featuring dairy-farm families caring for their farms under the "Love. Always an Ingredient" tagline.

As part of the relaunch the client’s website was redone. The agency re-designed the existing pages, added a products page and conducted a photoshoot for the addition of a recipes page.

The campaign has already obtained over 190 million impressions since its launch in September 2016, with social media initiatives attracting more than 6.3K Facebook followers. Coordinated paid search efforts and updates to the Borden Cheese website have resulted in a three-fold increase year-over-year in unique users, according to the agency.