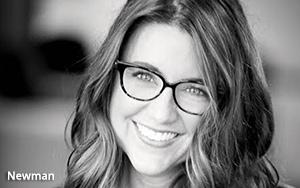 Andrew Swinand, newly minted North America CEO at Leo Burnett is quickly putting his stamp on the agency. Swinand, who joined the agency earlier this month has brought on board one of his Abundancy colleagues—Katie Newman—to serve as U.S. CMO, a new position at the Publicis Groupe-owned agency network.

Previously Newman was CMO at startups founded by Swinand, including The Abundancy, Ardent and Transparent Media Partners. (Burnett acquired both The Abundancy and Ardent when Swinand joined the company.) Previously she oversaw new business development, accounts, content distribution and measurement strategies at the firms.

The appointment marks Newman’s return to the agency. Actually, her second return, in between stints with Barkley and CP+B. She’s worked on blue chip brands including Allstate, Hallmark and Burger King and has won a bucketful of awards to show for it including Emmys, Effies, Lions and One Shows.

“Katie is a force of positive energy, collaboration and strategy,” stated Swinand. “She inherently understands the power of the Leo Burnett brand, having worked here before, [and] I am very proud to call her my business partner. I know that she will deliver growth and provide leadership for this company.”