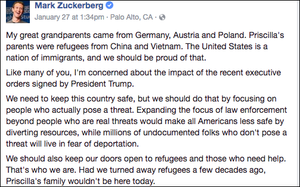 “We need to keep this country safe, but we should do that by focusing on people who actually pose a threat,” Facebook’s founder and CEO, explains in a new blog post.

“Expanding the focus of law enforcement beyond people who are real threats would make all Americans less safe by diverting resources, while millions of undocumented folks who don't pose a threat will live in fear of deportation.”

Zuckerberg also suggested the U.S. keep its doors open to refugees and those who need help.

He noted that his great-grandparents came from Germany, Austria and Poland, while his wife Priscilla's parents were refugees from China and Vietnam. “Had we turned away refugees a few decades ago, Priscilla's family wouldn't be here today,” he said.

President Trump, he adds, has promised to “work something out” for Dreamers -- i.e., immigrants who were brought to the United States at a young age by their parents. Presently, 750,000 Dreamers benefit from the Deferred Action for Childhood Arrivals (DACA) program, which allows them to live and work legally in the country.

“I hope the President and his team keep these protections in place, and over the next few weeks, I'll be working with our team at FWD.us to find ways we can help,” Zuckerberg added.

In 2013, Zuckerberg launched FWD.us -- a lobbying group focused on immigration reform. Detailing the organization in The Washington Post, the Facebook founder asked: “Why do we offer so few H-1B visas [which let U.S. employers briefly employ foreign workers in specialty occupations] … even though we know each of these jobs will create two or three more American jobs in return?”

More broadly, Zuckerberg has never been one to demur on political issues. Upon the recent news that he plans to visit all 50 states, some even speculated the tech titan could be laying for groundwork for a political career of his own.