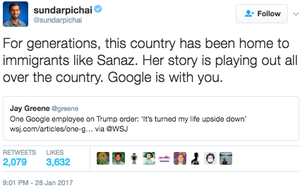 Three of the largest ad-tech companies have sent a warning to employees, investors and the industry about the uncertain future of technology and their respective businesses.

Google CEO Sundar Pichai sent a letter Friday to employees traveling overseas telling them that more than 100 company staffers are affected by a recently signed immigration order by President Donald Trump, a company spokesperson confirmed to Search Marketing Daily on Saturday. The news was first reported by Bloomberg.

On Friday, Trump signed an executive order prohibiting entry by citizens from Syria, Iraq, Iran, Sudan, Somalia, Yemen and Libya for 120 days. The order would ban people from these countries from entering the U.S. until the U.S. government determines what information it needs to safely admit visitors.

"We're concerned about the impact of this order and any proposals that could impose restrictions on Googlers and their families, or that could create barriers to bringing great talent to the U.S.," a Google spokesperson told Search Marketing Daily via email. "We'll continue to make our views on these issues known to leaders in Washington and elsewhere."

Microsoft issued a statement last week in a 10K United States Securities and Exchange Commission filing cautioning investors that "changes to U.S. immigration policies that restrain the flow of technical and professional talent may inhibit our ability to adequately staff our research and development efforts."

Ad-tech companies depend on their ability to attract and retain employees with a background in programming and design to further research and development. The U.S. lacks college students interested in science, technology, engineering and math (STEM).

The shrinking future of the STEM workforce in the U.S. began years ago. The number of "U.S. citizens and permanent residents earning graduate degrees in science and engineering fell 5% in 2014 from its peak in 2008," yet during that time the number of students on temporary visas earning the same degrees soared by 3%," according to one report citing survey data collected by the National Science Foundation and National Institutes of Health.

Also on Friday, Facebook Co-founder Mark Zuckerberg shared his view on immigration in a post, writing that ancestors of his and wife Priscilla came to the United States from Germany, Austria and Poland, as well as China and Vietnam, respectively.

"A few years ago, I taught a class at a local middle school where some of my best students were undocumented," he wrote. "They are our future too. We are a nation of immigrants, and we all benefit when the best and brightest from around the world can live, work and contribute here."

The U.S. is a nation of immigrants, but some believe governments should require certain types of documentation both to enter and exit the country rather than just walk across the border.