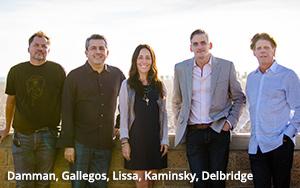 Grupo Gallegos is bringing together five specialist agencies to form a new communications group named UNITED COLLECTIVE in order to offer what the agency says is “one-stop shopping” from creative and in-house production to consulting and public relations.

Under this new umbrella, creative agency Grupo Gallegos will change its name to GALLEGOS United to further evolve beyond its original roots as a Hispanic-focused agency.

Meanwhile, Gallegos-owned business planning agency Poly will become POLY United and will continue to be led by Delbridge. Founded in 2013, the market research and intelligence agency works with brands like Carnival Cruise Lines, as well as Grupo Gallegos clients such as Valvoline and Foster Farms.

Another Gallegos-linked shop Luna will become LUNA United and will continue to be led by Damman. Formed in 2013 as a post-production studio for Grupo Gallegos clients, the agency has since expanded its capabilities into content creation, film editing and production.

The acquisition of RL Public Relations + Marketing (RLPR) will transform the 21-year-old PR shop into ROX United with founder Roxana Lissa retaining her leadership role as president, reporting to Gallegos. With offices in Los Angeles and New York City, the agency works with clients such as Domino's and has served as the PR agency of record for the California Milk Processor Board for 18 years.

Each company will work independently for their respective clients, and at times collaborate on various projects  and on new business.

None of the agencies will be changing locations and all five will retain their teams, a total of about 150 employees. Gallegos will serve as CEO for each of the companies.

Commenting on the new set-up Gallegos stated, “ The companies that make up the group ultimately all share the same vision – that the key to helping clients succeed is increasingly dependent on how lock-step they are to the diverse U.S. marketplace that makes up the U.S.”