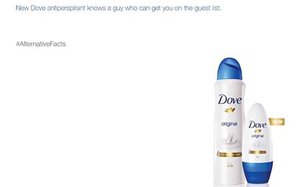 As American brands slowly test the anti-Trump waters -- with Uber and Google, among others, criticizing the travel ban executive order -- the UK arm of Unilever’s Dove and WPP’s Ogilvy has taken it a step further.

“New Dove antiperspirant will boost your wifi signal,” reads one of the blatant falsehoods seen in UK newspapers.

The two-page ad appeared in The Guardian and The Times of London on Saturday, according to Campaign US.

Other #AlternativeFacts about Dove antiperspirant:

-- “New Dove antiperspirant can plan your next holiday at a competitive rate.”

These “facts” appear on the left-hand page with the hashtag #AlternativeFacts at the bottom.

On the right-hand page is a single typewritten line: “New Dove antiperspirant cares for your underarm skin like never before,” followed by #RealFacts.