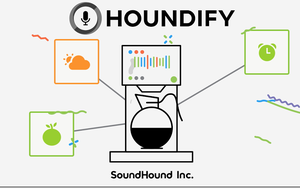 SoundHound on Tuesday announced $75 million in new funding. The company has raised $115 million to date.

Keyvan Mohajer, Soundhound cofounder and CEO, said the investment will accelerate growth through investments in international expansion and product development for its Collective artificial intelligence technology through its Houndify platform. "We don't waste our resources by investing them in the wrong direction," he said.

Indeed, SoundHound has spent more than a decade developing technology steeped into AI. Company engineers began by building a competitor to Shazam, and then moved into voice search through Houndify, which launched in March 2016 to compete against Siri and Cortana. The company has filed more than 100 patents in the past 12 years. The big move came when it developed a software development kit allowing others to integrate voice technology into consumer products like refrigerators and coffee makers.

Within the first year after launching the development kit, more than 20,000 developers have registered to use the Houndify's search technology to integration voice-enabled conversational AI into products from companies like Nvidia and Samsung.

Mohajer said SoundHound will create the libraries and the models to convert the technology into a variety of languages. "We identified about 14 key languages, but plan to work on others in the future," he said.

In late 2016, research firm Gartner predicted that 30% of searches will no longer use a screen by 2020, showing a fundamental shift in the way consumers find information.

One of the biggest challenges with voice search remains false triggers, where the virtual assistant identifies an unintended search command and responds. "It's actually very damaging to the user experience, because it starts to send the audio to the servers," he said. "There are privacy concerns because you could be talking about something confidential."

Voice search and voice-enabled technologies are "always listening," but it's only after they hear the trigger phrase that they carry out the command or request.

Mohajer said SoundHound worked hard to solve that challenge by allowing the development partners to choose the wake-up phrase.