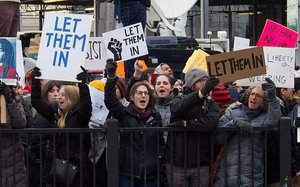 A growing number of technology companies have begun to work together to challenge President Trump's immigration and travel ban.

GitHub, an open-source development community, seems to be spearheading a Tuesday meeting with a group of tech firms to discuss filing an amicus brief. The brief is filed by parties that are not litigants, in support of a lawsuit challenging President Trump's action restricting immigration and travel.

Trump's executive order, signed this past weekend, restricts immigration for 120 days from seven Muslim countries where, it claims, travelers cannot be "properly vetted." The administration says the action is intended to increase national security.

Those in transit will be allowed to enter the U.S. until February 2, reports The Wall Street Journal, citing agencies charged with receiving them in partnership with the government.

Those heavily invested in the open-source development community, such as Google, are among the companies invited to participate in the meeting.

The business protest is not confined to tech companies. Ford Motor Co, Coca-Cola and Goldman Sachs Group, among others, also weighed in Monday.