As real-time social platform Snap Inc. prepares to file for its initial public offering, scheduled for next week, all eyes are on Snapchat. The latest projection is that the company could be valued at $25 billion -- or probably more when all is said and done. After a road show, the IPO could go live in March if things remain on track.

Meanwhile, eMarketer projected that in 2017, Snapchat will generate $935.5 million in worldwide ad revenue, an increase of 155.1% over last year. It also estimates that Snapchat will derive 86% of its revenue from the U.S., with that share shrinking to 75% by 2018 as it expands into other markets. And this year, Snapchat is expected to  capture 0.4% of the worldwide total digital ad market, and 0.7% of the worldwide mobile ad market, according to the digital research firm.

This year, Snap’s U.S. user base is expected to have 66.6 million users, an increase of 13.6% over last year, according to eMarketer. And no surprise: Snapchat’s heaviest users are U.S. adults between the ages of 18 and 24. But anecdotal observations would lead RTBlog to believe that there are legions of people younger than 18 -- in fact, as young as 11 or 12 -- who are using the platform multiple times a day. Still, we don’t have those data points.

But there have been some reports about declines in devotees’ use of Snapchat Stories, with view counts ranging from 15% to 40% and a reduction in how often they, or those they monitor, post to Snapchat Stories. It will be interesting to see how the numbers pan out as Snap marches toward its IPO.

Separately, this week, Snap struck a deal with 4C Insights, a provider of multiscreen data and media tech solutions, to enable brands and agencies to manage Snapchat ad placements from an external self-serve platform. The arrangement aims to make it easier for Snap to generate more ad revenue. Brands can take control of their ads and scale campaigns quickly, while striking the right balance between the optimal content and audience delivery, according to Lance Neuhauser, CEO at 4C. 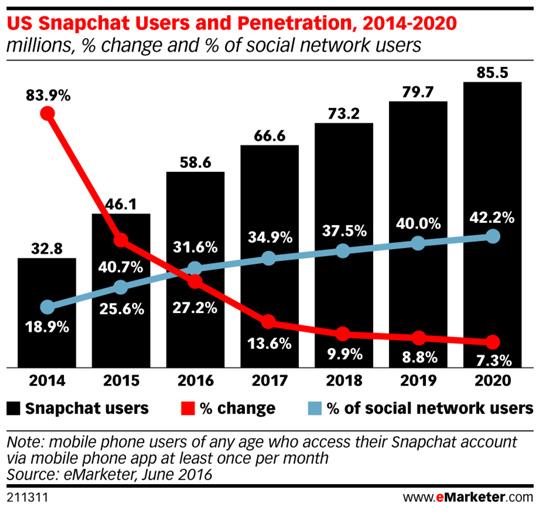