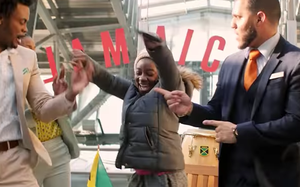 JetBlue and the Jamaica Tourist Board used a clever hook to support the #JetBlueFlashFares campaign that provides low cost vacation packages.

A team effort, the concept was first developed and produced by Rokkan following a creative briefing from the JetBlue team. Then JetBlue brought the idea to its partners at the Jamaica Tourist Board.

The hosts interact with travelers by taunting them about the current 85 degree temperature in Jamaica, compared to 28 degrees in NYC as well as inquiring about the lengths of their commutes. Finally, they ask riders whether they would be willing to trade their commuter tickets for a JetBlue Vacations package - air + hotel - to Montego Bay, Jamaica. (JetBlue returned their train tickets.)

"I’d say the biggest challenge for an event like this, with hidden cameras, is getting often jaded New Yorkers - rushing to catch their trains - to pause and relax for a moment," says Tara Carson, manager of consumer promotions and regional marketing, JetBlue. "We’re happy to reward those that did pause with a chance to relax for a bit longer under the Jamaican sun."

The film, which can be seen on YouTube and other sites,  is supported by paid media placements and social influencer activations, which are being handled by MullenLowe, JetBlue’s AOR.

The airline has had a long-standing partnership with the Jamaica Tourist Board since JetBlue first launched flights to Montego Bay in 2009.