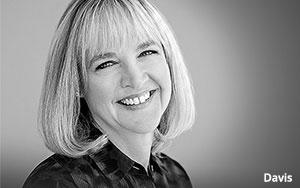 Independent agency 22squared has appointed Cheryl Davis Chief Financial Officer of the agency. She’s the first woman at the agency to hold the CFO post.

Davis, a 22-year veteran of the agency, reports to CEO Richard Ward and succeeds current CFO Tom Fuller, who recently retired after 30 years in the industry and 25 years with the agency.

"Curating and developing female leadership and talent is a deep part of the ethos and culture of 22squared," says Signe Garnitz, EVP, executive director of human resources, 22squared. "We proudly continue to drive to open doors and create opportunities for women leaders across and throughout our organization."

The agency has doubled down on its efforts to recruit and advance women via education, networking and career development programs. Internally, the women of 22squared launched a Lean In Circle last year, created for female employees at all levels to meet and discuss career development, networking strategies, leadership advancement, and work-life blend and balance. Additionally, 22squared invests in developing  female leaders through Pathbuilders – a well- regarded education and advancement program established in 1995. The agency now says its workforce is comprised of 68% female employees, 47% female creatives, and 29% female executive leadership.