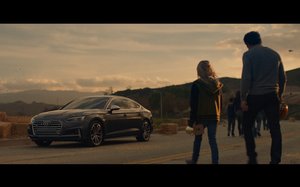 Audi’s crystal ball is working well since its Super Bowl spot focuses on women’s equality, a hot-button issue since the worldwide women’s marches on Jan. 21.

The poignant 60-second spot, “Daughter,” shows a father watching his daughter compete in a downhill cart race as he reflects on what he should tell her about the inequities in the world, where “she will automatically be valued less than every man she meets.”

When she wins the race, they embrace and he ponders a different future for his daughter. The spot concludes with a commitment from Audi on equal pay for equal work, because “progress is for everyone.” The automaker calls it a “theme of universal importance.”

The spot was shot by award-winning female filmmaker Aoife McArdle and will air during the third quarter of the game. The commercial was created by San Francisco-based Venables Bell & Partners. It features the all-new 2018 Audi S5 Sportback Prestige, which will be available in the spring.

It concludes with the tagline #DriveProgress, which Audi will use in the coming year to promote new and ongoing initiatives. The automaker will launch a custom Snapchat filter nationally encouraging fans to participate in the #DriveProgress conversation by sharing their own stories.

This year marks Audi’s ninth appearance at the game.

“With ‘Daughter,’ Audi continues to push the envelope with compelling storytelling on a national platform. Pay equality is a big message for a big stage,” said Loren Angelo, vice president of marketing, Audi of America, in a release. “As a business built on bold innovation – from LED lighting to Audi quattro – progress is at the heart of what we do. We’re a brand that’s ahead of the curve and looking towards the future, just like our next generation of buyers.”

The spot is available to view at the Audi USA YouTube channel.

The automaker is already making good on the message in the ad. The company has publicly pledged to support an ongoing commitment to women’s pay equality in the workplace and to foster a work environment that drives equality for all employees. Audi also instituted a graduate internship program in which 50% of enrollment must be female.

The company also supports external initiatives to develop opportunities for women at the educational, career and leadership levels in art and film, STEM, and business that will inspire and secure the next generation of female leaders. The brand recently collaborated with longtime partner AFI FEST to create the Audi Fellowship scholarship program, which will grant one promising female director AFI Conservatory enrollment. Audi has been the official automotive sponsor of AFI FEST for over 14 years.