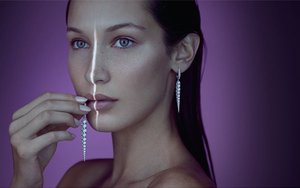 Developed with agency Select World, the campaign highlights the brand's newest diamond cutting technology. Each ‘Les Merveilles’ piece has diamonds arranged on four sides of a precious metal setting with little or no metal visible to the eye. This is illustrated in the campaign by showing the jewels strikingly shown across Hadid's face.

The media strategy includes social media as well as print ads in magazines such as "Harper's Bazaar," "Telegraph," "Hia," and "Villa 88."

The goal of the new campaign is to build the brand’s identity by connecting with existing customers, as well as introducing the Geneva-based brand to a wider international audience, according to the agency.

Word also surfaced this week that Hadid is headlining a new campaign for DKNY.

Select World and Boghossian have worked together since 2015.