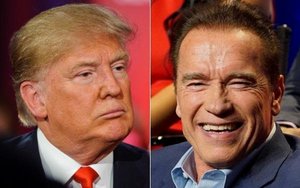 As many of us feared, Donald Trump has declared war …  against Arnold Schwarzenegger!

It’s like something out of “Duck Soup,” only this time Freedonia’s going to war over a TV show, “The Celebrity Apprentice.” Specifically, Trump is angry over the abuse being suffered by his old TV show at the hands of current host and fake CEO Arnold Schwarzenegger.

So America’s Twitterer In Chief took time out of his busy schedule alienating close neighbors and stalwart allies (Mexico, Australia, Tiffany & Co.) to ask that the nation join him in a prayer for higher ratings.

That raises a question, of course: Who do we pray to? Nielsen?

Trump made this appeal Thursday morning at the event known as the National Prayer Breakfast. It’s an event we hear about from time to time, but we really don’t have any idea what it is.

Questions include: Why do we need a National Prayer Breakfast? What do they serve there? Is the meal served by waiters or is there a breakfast buffet like at the Hampton Inn?

Whatever this event is supposed to be, the TV Blog has never been invited. Maybe an invitation should have been proffered this time because the topic of TV was front and center.

The honor of introducing Trump went to Mark Burnett, the executive producer of the original “Apprentice” and “The Celebrity Apprentice” (and other reality shows such as “Survivor”).

Perhaps this is why Trump went off-script to mention the woeful state of the ratings on the current edition of “The Celebrity Apprentice” with Schwarzenegger, which premiered January 2.

For the record, the two-hour episode of “The Celebrity Apprentice” this past Monday on NBC drew 3.71 million viewers. As Trump might say: That’s bad. Not good.

Specifically, Trump said of Schwarzenegger’s stewardship of his old show (on which Trump is still credited as a producer): “The ratings went right down the tubes. It has been a disaster. I want to just pray for Arnold … for those ratings.”

From the video of these remarks, it is not difficult to conclude that the great Reality TV Star In Chief was trying to be funny and lighthearted. But some questioned the propriety of making light of prayer at this apparently religious morning event.

In any event, Schwarzenegger countered with a videotaped statement of his own in which he proposed that he and Trump trade places.

“Hey, Donald,” said the former two-term governor of California in his trademark Austrian accent. “I have a great idea. Why don't we switch jobs? You take over TV, ’cause you're such an expert in ratings. And I take over your job, so that people can finally sleep comfortably again.”

Well, you didn’t expect Trump to just sit there and stand for this, did you? Sure enough, Trump was back on Twitter again on Friday morning expressing himself with his usual eloquence.

“Yes, Arnold Schwarzenegger did a really bad job as Governor of California and even worse on the Apprentice … but at least he tried hard!” tweeted the nation’s Couch Potato In Chief.

Clearly, Trump’s devotion to television has brought TV and the American presidency into closer proximity than ever before.

Now, in addition to keeping track of all the alternative facts he has to remember about foreign powers (both for and against us), immigrants, Supreme Court nominees, national healthcare and all the rest, the American president is now concerning himself with the state of network prime time.

As he probably knows, those Nielsen charts can be pretty complicated. The TV Blog suggests a new cabinet post, U.S. Secretary of Ratings, to monitor and govern this crucial area of importance to all Americans. Suggested nominee: David Poltrack.

In fact, focusing a new government department on the ratings issue might be exactly what the TV industry needs to improve the way TV audiences are measured.

Maybe the USDOTVR (United States Department of TV Ratings) will discover that the problem with “The Celebrity Apprentice” has nothing to do with Schwarzenegger at all, and everything to do with Nielsen methodologies.

Please bear in mind that I say this with very little understanding of the way ratings work -- even after 30-plus years of writing about them.

We are now at a crucial juncture in our history. Just the other day, riots broke out at the University of California at Berkeley, possibly over the ratings for “The Celebrity Apprentice.”

The situation is fraying nerves -- so much so that at least one comedian, Sarah Silverman, called for a military coup to overthrow the president.

A coup d’etat of that type would seem to be overly dramatic, however. It would be much more peaceful to just bring the president into the “Celebrity Apprentice” boardroom and have pretend-CEO Schwarzenegger, who plays a general on a video game commercial, simply fire him.