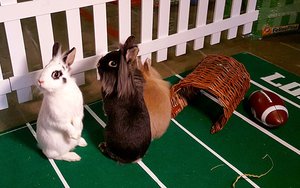 What better way to ensure some attention on Super Bowl weekend (other than buying a $5 million spot in the game) than to create your own “Bowl”-themed event?

Puppy and Kitten Bowls have been deployed and probably others. Now General Mills is joining the Goof Bowl Parade with its very own Annie’s Bunny Bowl.

The organic food brand developed the concept in-house and teamed with DeNoise Studios to film the “bowl” and execute post-production edits.

"Annie’s Bunny Bowl" will run on the brand’s official Facebook page via Facebook Live on Friday, February 3 at 1 p.m. EST

The bunnies hail from RabbitEARS, a local Berkeley rescue shelter, near the brand’s headquarters. The goal is to support local adoptions and spread awareness for the Bay Area Rescue Community.

"In honor of the brand’s beloved mascot and official Rabbit of Approval, Bernie, Annie’s will live stream from an official bunny-approved stadium, Cottontail Park, with the fluffiest and hare-iest of players," says Christina Karem, Annie's spokesperson.

"No bun-neccesary roughness is expected. And while we are hopping for an exciting game, it is clear some of the bunnies don’t carrot all."

Annie's will support the bowls by promoting the live stream from the brand’s Facebook page, as well as leveraging social-media chatter. At this time, there are no plans to bring the event to television.