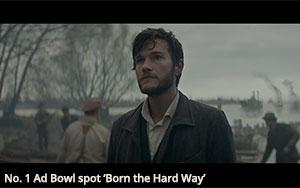 With sports pundits calling Super Bowl LI the greatest football game of all time, many of those $5 million spots became more or less invisible, swirling around like so much post-game confetti.

Set within the context of the game — a tense drama, with the favored New England Patriots trailing the entire game before staging the biggest comeback in Super Bowl history — only a handful of ads, including the immigration-themed Anheuser-Busch’s "Born the Hard Way" and 84 Lumber’s "The Journey Begins" grabbed viewer’s attention.

And it didn’t help that Lady Gaga’s performance in the Pepsi Halftime Show was riveting, right down to the 300 drones dancing in the Texas sky.

“Even though it was an amazing game, it was just an average year for ads,” says Jonathan Lewis, VP of strategy for McKee Wallwork + Co., a New Mexico-based agency that runs Adbowl, ranking the Super Bowl spots. “There weren’t a lot of highs and not a lot of lows. We saw a pretty big reaction to all the strife and uncertainty in the country right now,” he tells Marketing Daily, “and a lot of sentimental ads, reconnecting people with family and their roots. People are ready to have a little bit of hope, and are looking for something positive.”

While marketers can create their best ads, it’s impossible for them to predict the pace of the game, he says. This match-up looked like a blowout for the Atlanta Falcons, and likely lost viewers as a result. The game exploded in the third quarter before moving into overtime, a Super Bowl first, making it tough for — let’s say — a sweetly sentimental ad to connect with sweaty, heart-pounding fans.

Celebrity-filled, upbeat ads — like Justin Bieber’s dance moves for T-Mobile, Melissa McCarthy heroic antics for Kia, and a bumper crop of stars in their high-school yearbook photos for Honda, for example, also seem to have struck a chord, as did a handful that are just good fun. (Cue the ghost of Spuds McKenzie for Budweiser and a gonzo gopher for Skittles.)  “And Procter & Gamble had a great Super Bowl,” says Mark DiMassimo, chief at DiMassimo Goldstein, an ad agency in New York. “The Tide spot was great, and so was Mr. Clean. It was fun to see ads for cleaning products holding their own against cars and beer.”

In the early going of Adbowl, including the number of views ads racked up in the days leading up to the game as well as voting throughout the broadcast, Budweiser’s spot was leading, followed by T. Mobile, Skittles, Bud Light and Mr. Clean.

Obviously, not all Twitter mentions are good. Social-media wags were having plenty of fun lambasting Audi for its ad promoting equal pay for women by posting photos of its all-male board of directors, for example, while many blasted 84 Lumber and Budweiser, calling for boycotts because of their stance on immigration. (84 Lumber’s site, which is airing the five-minute-plus version of "The Journey," including the parts Fox refused to air because of its controversial portrayal of the wall, crashed briefly from traffic during the game.)

“But clearly, a lot of people were moved by that story; it tells the Mexican immigrant story in such an emotional, positive way,” DiMassimo says. He also especially liked Honda’s Yearbooks ad, with celebrities like Tina Fey, Robert Redford, Steve Carell, Viola Davis and Jimmy Kimmel handing out folksy life advice. “When the yearbook pictures started talking, you couldn't look away,” he says. And he thought the quirky spot for It’s a 10 haircare, which led with “We’re in for at least four years of bad hair,” was grabby, too.

But will anyone remember those? While the Big Game sparks debates every year about how often the cost of producing, publicizing and airing a Super Bowl produces a worthwhile return on investment, a recent survey from Federated Media, a content marketing agency, reports that 51% of people it polled could remember only one or two commercials from the Super Bowl, and 20% say they “rarely remember” either the brand or product that were in ads.