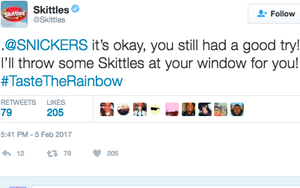 Super Bowl LI was the most “real-time” yet, both on and off the field, as well as on and off TV.

The game, the first ever to have such a come-from-behind victory and the first to go into overtime, featured some amazing -- and not-so-amazing -- live performances, as well as some sudden deaths.

Perhaps the biggest was Snicker’s heavily promoted “first ever, live” Super Bowl commercial, which after weeks of promotion -- including a flight of tune-in ads for an ad -- came across as “Whaaa?”

Reactions were mixed on Twitter, with some followers arguing that the catastrophic spot, which ended awkwardly and abruptly, was kind of the point. Others were not so generous.

A string of equally confounded comments, animated GIFs and emojis followed, including one from candy marketer rival Skittles, a Wrigley brand, which tweeted some backhanded support to Mars Inc.’s Snicker’s effort:

@SNICKERS it’s okay, you still had a good try! I’ll throw some Skittles at your window for you! #TasteTheRainbow"

On the plus side, Snickers did generate plenty of attention and free media impressions -- not just from social media, but from all media. Its “risky” live Super Bowl play was the subject of Monday morning network news shows. It led the Super Bowl commercial review segment on ABC’s “Good Morning America,” which concluded that it left “everybody scratching their head.”

Maybe that was actually the point, because even Snickers leaned into the real-time fail, tweeting its own self-effacing: “Never shoot a live 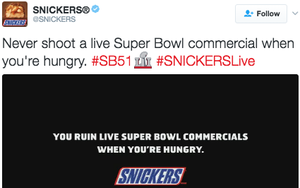 Almost all the brands in the Big Game leveraged Twitter integrations in some form, sometimes inviting and sparking counter-tweets and/or retweets from followers and rivals alike.

According to an analysis released by Twitter last night of the most tweeted ads during the game, Snickers was an honorable mention, while rival Skitters ranked seventh among the 10 most mentioned spots.

Pepsi dominated at No. 1, no doubt because it also was the title sponsor of Lady Gaga’s spectacular half-time show, which ended with her making a real-time reception before diving off the stage.

Perhaps the best live Twitter integration was construction supplier 84 Lumber’s, which drove users to its Web site to see the conclusion of a 30-second spot it aired during the game. Fox rejected the company’s original version, which featured a giant wall along the U.S./Mexican border, so 84 Lumber used its on-air spot to run a emotional vignette of a Mexican mom and her young daughter emigrating north. The online version, which initially crashed 84lumber.com’s servers, was also viewable on YouTube and showed the mother and daughter confronted by a giant wall, until they noticed two giant wooden doors granting them access.

It was fantastical allusion to one of the other big subtexts of Super Ad Bowl LI that touched on American immigration and inclusion themes (see Bob Garfield's column), including an Airbnb’s #weaccept spot, which was followed by an email marketing initiative to members this morning, asking them to provide temporary housing to 10 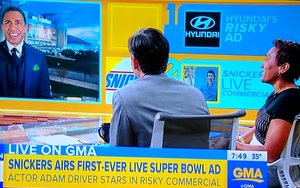 Most spots, however, went for the obligatory laugh, including a wonderful two-parter from Procter & Gamble’s Tide that evoked a real-time Twitter sensibility as it followed Fox Sports announcer “trending” in real-time after he stained his shirt during the live telecast, rushed off-field and out of the stadium, only to end up at actor Jeffrey Tambor’s home, where he waited as Tambor washed his shirt with Tide. Part II of the commercial ends with Bradshaw back in the announcer’s booth, when co-commentator Curt Menefee’s spills coffee on his shirt. Cut to Tambor sitting a 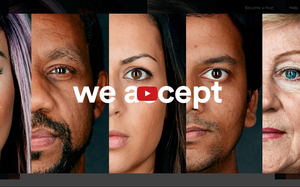 According to Twitter’s analysis Super Bowl fans around the world sent more than 27.6 million Tweets about #SB51 during the live telecast on @NFLonFOX according to Twitter. For full details on the “Twitter Ad Bowl” results, go to the Twitter Advertising blog.
advertising, real-time, social media, sports, super bowl, tv, twitter
Next story loading