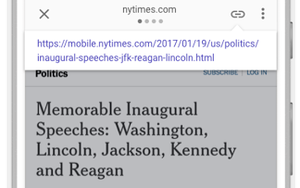 Google has added safeguards to Accelerated Mobile Project pages making it easier to discover content in search, copy and share canonical URLs of mobile pages, and protect against phishing attacks on publisher sites. The changes make it easier to identify illegal from legitimate content.

On mobile devices, each page will have three URLs to identify the origin of the copy. The word "amp" will appear in the URL, which Google calls AMP Viewer URLs, along with the original source or AMP viewer header bar that states the publisher, and when it's served from an AMP Cache URL.

Alex Fischer, software engineer for Google Search,also explains in a post the reason why "caching" and "pre-rendering" URLs exist, which the company says are both essential to speed the delivery of the content.

Some commenting on the post want to disable the feature. Alejandro Zielinsky, SEO senior analyst at T20 Media, wrote that the AMP feature reduce the Web site's functionality by caching the content. Another suggests concerns that "Google is unfairly prioritizing AMP in search results."

"If load times and user experience is really the issue here then Google should prioritize based on load speed, wrote Yee Cheng Chin. "An AMP site with tons of images isn't necessarily better than a simple minimal static page website served over CDN. I also want to use Google to look for relevant content, not whether a Web site conforms to Google's own proprietary standards when searching."

Fischer writes that the reason for caching URLs, which points to cached versions of an AMP document, circles back to the design principles of AMP, which aims to solve the problems of the mobile Web. A webmaster only needs to make their content available and Google AMP Cache can then cache and serve the content when it's not available through Google’s infrastructure through a new URL that mirrors the original.

The AMP Viewer URLs exist because Google pre-renders the content. Google explains that AMP can pre-render documents without "hogging up users' CPU and memory" and without running privacy-sensitive analytics code.

AMP URLs appear when the page gets viewed as an iframe on the same page without the need for the browser to change the URL.

All this makes it easier for Google to add what it calls an "anchor button" in the AMP Viewer header on Google Search. The feature allows mobile users to long tap on the link to share the content, a feature is now available on the iOS Google app.