Is Trump's Press Secretary A Joke? Late-Night TV Thinks So 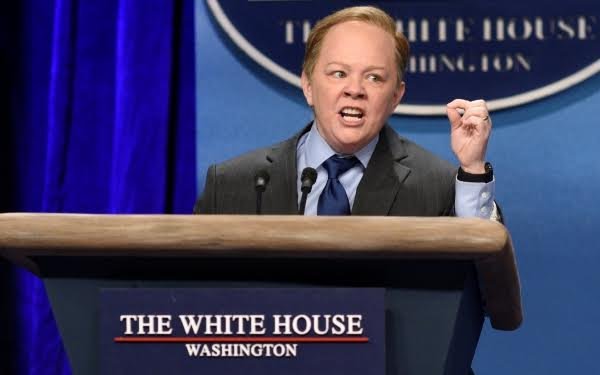 If there are worse p.r. reps out there right now than Sean Spicer, I'd like to hear about them.

That's really what the presidential press secretary is -- publicist for the president and his administration. It's a tough job, but so is any position at the top of the communications department at a large organization -- from the White House to corporate America.

And it's not made any easier when the organization’s actions and policies are confusing (to say the least) and, as a result, difficult to find the right words to defend.

One example was the way in which Spicer recently “defended” Trump's immigration ban in the wake of news that a five-year-old boy from Iraq -- reportedly a U.S. citizen -- had been detained and maybe even handcuffed (reportedly) at a U.S. airport.

The video of Spicer's tortured defense of this embarrassing application of U.S. government power made it into several late-night monologues, including this one on CBS's “Late Show with Stephen Colbert.” Before running the video, Colbert showed a headshot of an open-mouthed Spicer and described the press secretary as an “angry neck with ears.”

It’s only one example from a litany of late-night comedy bits seen recently that all take aim at Spicer. The presidential publicist therefore has achieved something few (if any) of his predecessors have done, which is: He has become a late-night comedy joke almost on par with his boss.

Previous press secretaries have been much more adept at managing their role as the presidential diplomat to the press corps, no matter how much they may have felt beleaguered by the ornery reporters on the White House beat.

This would be the state of the Spicer regime at the head of the president's communications pyramid. If Spicer were a competent communicator, he would not have emerged as a target for late-night derision. His boss might be a target, but that's nothing new -- presidents always are (some more than others)

But a press secretary as a running joke for the late-night shows? That's what's happening now from “Jimmy Kimmel Live” to “Saturday Night Live.”

Kimmel's running gag on Spicer is titled Drunk Sean Spicer. For this bit, the Kimmel people merely take a piece of video from a Spicer news briefing and slow it down, so it looks and sounds like Spicer is intoxicated.

Of all the Spicer bits seen recently, last weekend's performance on “Saturday Night Live” by Melissa McCarthy as the angry press secretary (photo, above) is the one garnering the most attention this week.

In the wake of its airing last Saturday, there have been reports that Donald Trump himself was “concerned” about the way his press secretary has become a magnet for parody on the late-night shows -- which Trump evidently watches religiously.

For the late-night shows, Spicer and Trump are the gifts that keep on giving. No sooner had Spicer defended the U.S. government's zeal in detaining a five year-old, but some kind of dust-up occurred over whether Trump owns a bathrobe.

This seemed to stem from a New York Times story alleging that Trump wears a bathrobe when undertaking nocturnal activities such as watching TV or wandering around the White House. This is not a scandal, of course, since many people own bathrobes and wear them in the privacy of their own homes.

And yet, Spicer seemed to make a big thing out of this bathrobe story when he declared it wasn't true, and then seemed to say that the president doesn't own a bathrobe. This doesn't seem true since Trump owns hotels and country clubs where there must be plenty of bathrobes with the name “Trump” embroidered on them.

I wonder what Jimmy Kimmel thinks of this bathrobe story?