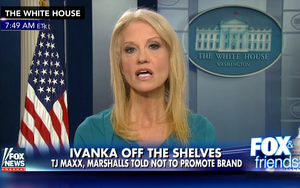 Later in the segment, Conway described it as “a wonderful line” and said she owns “some of it.”

“I’m going to give a free commercial here today,” Conway told the Fox News team, blurting: “Go buy it today everybody. You can get it online.”

The unabashed endorsement of a Trump family business during an official news appearance representing the White House raised ethics questions from critics and journalists.

White House Press Secretary Sean Spicer told reporters Conway had been "counseled" about it, but declined to elaborate.

Members of the House of Representatives Oversight committee late Thursday sent a letter requesting the Office of Government Ethics conduct a review of Conway’s Ivanka endorsement and would recommend any disciplinary action, if warranted.