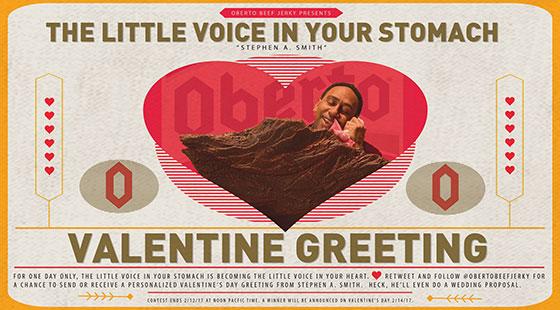 As part of a new effort to test focused campaigns on single social network platforms, Oberto's is introducing its first digital Valentine's Day campaign on Twitter.

Developed by creative agency Positivity and social media shop Corbin Brands, the campaign centers on  ESPN media personality Stephen A. Smith who will gift a personalized Valentine’s Day greeting to one fan on the social network.

"We decided to focus on Twitter for Valentine’s Day and Smith has the largest, most engaged audience on Twitter of all our brand ambassadors," says Stephen O'Hare, director of marketing, Oberto. "We almost always give our partners the freedom to send their own message.  At the end of the day, we want the message to be authentic."

In order to win, fans need to follow and retweet @ObertoBeefJerky through Sunday. One randomly selected winner can either receive the message or have the opportunity to gift the message to someone else. The contest is promoted with a series of Smith video snippets, GIFs, and signed basketballs.

"In 2017, Corbin Brands is testing focused campaigns on specific social platforms, as we've seen very little crossover from one platform to the next, in previous campaigns we’ve run,” says O'Hare.

Oberto has typically introduced promotions tied to more obscure holidays because they are better fits with the brand's creative tone of voice and there is less digital noise, O’Hare says, citing Drone Jerky on National Beef Jerky Day, a jerky cake on brand ambassador Gronk's (Rob Gronkowski) Birthday, Best Friends Day with Gronk & Sherm (Richard Sherman),  to name a few that have done over the past year. "Besides Jerky is the perfect gift on Valentine’s day for those with a 'meat tooth' vs. sweet tooth," adds O'Hare.