Can Under Armour Play For Both Teams? 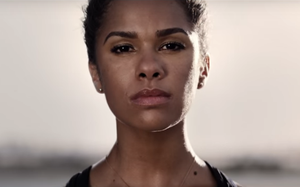 Under Armour is under fire and the latest brand to ignite a social media set-to. After CEO Kevin Plank expressed support for President Donald Trump, three of its most prominent athletes reacted with strong anti-Trump remarks, as did many consumers.

And while it looks like it is trying to keep its hands clean with a politically neutral strategy, marketing experts say it may just not be possible given the country’s continued contentious mood.

“Brands have become the Molotov cocktail of debate,” says Thomas Ordahl, Chief Strategy Officer at Landor. “And staying neutral, above the fray, is very difficult. Like it or not, brands have become the proxy wars for social issues, and people expect brands to stand for something. Deleting Uber from your phone or cutting up your Nordstrom card is a badge of honor.”

Here’s a brief chronology: Kevin Plank, Under Armour CEO, reveals he has met with Trump, describing him as “a real asset.” Stephen Curry, NBA legend who is said to singlehandedly contribute $14.1 billion to Under Armour’s market value, quipped back: “I agree, if you remove the ‘et.’” Shortly afterward, Dwayne Johnson, aka The Rock, took to Instagram and described Plank’s words as “divisive and lacking in perspective.” Next, dancer Misty Copeland, the face of UA’s award-winning marketing campaign focused on empowering female athletes, weighed in, saying she “strongly disagrees with Kevin Plank’s recent comments.”

She went further than either Curry or Johnson, asking for some kind of response. “It is important to me that he, and UA, take public action to clearly communicate and reflect our common values.” By day’s end, Under Armour obliged, standing by its commitment to diversity and inclusive immigration: “We have teammates from different religions, races, nationalities, genders and sexual orientations; different ages, life experiences and opinions. At Under Armour, our diversity is our strength, and we will continue to advocate for policies that protect our house, our business, our team, and our community.”

But in an attempt to thread the needle, it also defends Plank’s decision to join the Trump administration’s American Manufacturing Council, and — in its way — makes a mediating argument for people to more or less calm down. “We engage in policy, not politics,” it says. “We have always been committed to developing innovative ways to support and invest in American jobs and manufacturing.”

Will it work? Is it possible that people might be willing to accept that a CEO could both be open-minded to Trump’s job-creation strategies, for example, but still oppose his views on immigrations? Not if Shannon Coulter, founder of the #GrabYourWallet boycotts, has anything to say about it: “Dear Kevin Plank & beyond,” she says on Twitter. “You cannot be "against a travel ban" and in favor of his economic policies. Nope. Doesn't work like that.” 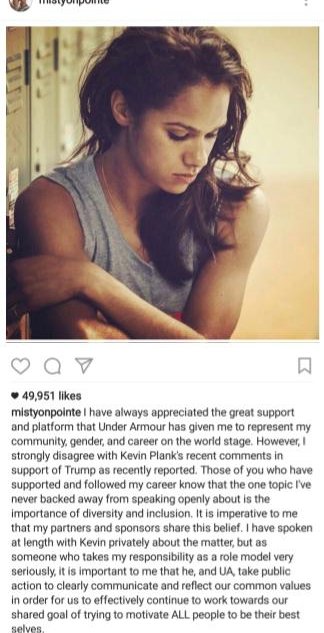 Corporate moves like Nordstrom dropping Ivanka Trump’s clothing line are easily understood, she says. “It’s a message that comes across quickly — the company is kicking her out, and that feels good to people who oppose Trump.” She speculates that move came about because Nordstrom had good data on its base, and knew it would likely retain or build more business than it would lose. “But brands are going to have to titrate these issues very carefully.”

The bigger the brand, says Ordahl, the bigger the challenge. “Larger brands have plenty of customers on both sides of the divide, which means they can’t win.”

New research from Harris Poll reports that Under Armour may have a much tougher time aspiring to neutrality. In its latest reputation rankings, it also scored companies by their appeal to Democrats or Republicans, and Under Armour is bright blue, ranking No. 8 on the Democratic list. (The top 10 companies perceived as Democratic in its reputation survey also include Tesla, Apple, Costco and Wegman’s. Chick-fil-A, Johnson & Johnson, Hobby Lobby, Publix and USAA are among the highest ranking Republican brands.)

Skey points out that there is an inherent hypocrisy in consumers. “The same people who say they are shopping at Nordstrom again because it dropped the Ivanka Trump line never stopped shopping at Amazon, which also sells Ivanka’s clothing and is on the #GrabYourWallet list,” she tells Marketing Daily. “Taking something away that I’m already committed to, like Amazon Prime? That’s hard.” (Tellingly, Amazon landed high on both the Democratic and the Republican list.)

Don’t expect a truce anytime soon. Ordahl thinks it won’t be long until brands try to bait Trump, hoping that a tweet rant will get them plenty of earned media. “That’s a little cynical,” he says, “but it’s also inevitable. I’d bet that a major brand will do it this year.”

Still, he says, it’s quite possible that none of this matters. Under Armour just posted difficult numbers, and Nordstrom — like all retailers — is facing an ultra-competitive environment. “We don’t know if all this drama is going to amount to anything in terms of lost sales, or if it’s all just going to blow over. If your brand comes under attack, is it catastrophic? Or will it all be a tempest in a teapot?”

politics
1 comment about "Can Under Armour Play For Both Teams?".
Check to receive email when comments are posted.
Next story loading