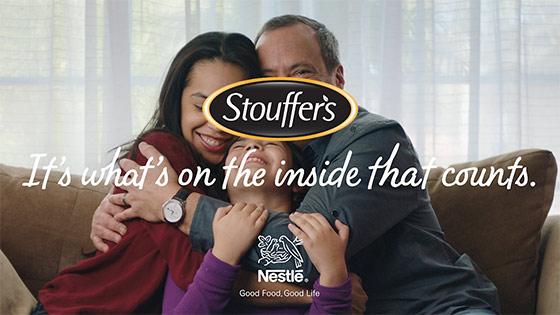 Nestle is introducing the "It's What's on the Inside That Counts" campaign, from agency Swift, to promote its Stouffer's food brand.

The new campaign represents a shift in Stouffer's approach to emphasize emotional connection in addition to taste appeal. The approach is designed to reflect evolving consumer lifestyles and priorities, per the agency.

One spot features a recently married gay couple and their best friend, who have all moved from Texas to New York City to pursue their careers and dreams. They gather in her tiny apartment for a casual dinner.

Another spot introduces a military family with three young children. A third video features a family of three in Los Angeles who meet for a late-night dinner to accommodate the family's work schedule.

To underscore authenticity, the campaign enlisted actual U.S. families and friends to share what dinnertime means inside their homes. The people in each spot aren’t actors, and their words aren’t scripted.

"When people sit down to dinner, they want good company, ingredients they can trust, and a meal that tastes homemade. In a word, realness,” the agency stated.

This isn't the first time Stouffer's has used real people for its marketing efforts. The food company’s Let's Fix Dinner challenge followed several families across social media as they changed their eating habits.

This campaign coincides with the firm’s "Kitchen Cupboard" commitment to simplify Stouffer's recipes, starting with Lasagna with Meat Sauce, by only using ingredients found in most homes.