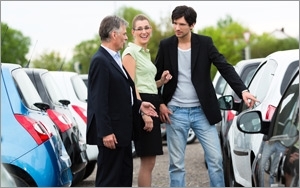 Luxury car drivers do not behave the same way as drivers in other segments when they are off the road, according to a study released Feb. 15.

The report covers everything from make/model/brand affinities by ethnic groups to how these preferences impact shopping habits (CPG products and retail location).

The “utility” segment is surging as the car segment continues to hover near historic lows. Eighty-two percent of respondents age 35+ are utility drivers, compared to 67% of car drivers and 69% of truck drivers. Nearly two-thirds of these customers prefer domestic brands, which spells opportunity for some and a challenge for others. Given the rapid growth, this is clearly a group that auto marketers want to get much more familiar with, Schulz tells Marketing Daily.

“Since they are migrating from non-luxury car, they share some traits, but also have some very unique characteristics which make them a bit more challenging to pinpoint,” he adds.

The top utility vehicle choice among African Americans, Caucasians, and Hispanics is the Ford Explorer, while Asians favor the Honda Odyssey. For the luxury car segment, the top choice for Asians, Caucasians, and Hispanics is the BMW 3-Series, while African Americans prefer the Cadillac CTS. The Honda Accord is the most prevalent non-luxury car for all ethnicities.

Marketers are already sold on the accuracy and targeting of people-based marketing, but that’s only been available within a few walled gardens. Giving them the ability to now target like this across the open Web, where people are spending the majority of their time, will help move the needle for marketers, Schulz says.

“For example, understanding grocery product or retailer preferences, and actual transactional data can inform partnership opportunities and/or cross-promotion,” Schulz says. “Certainly, TV viewing habits of targeted shoppers can inform media plans and better align spending not only on TV but across all channels, to the actual behaviors of desired customer segments. There is still an art to advertising, but adding deterministic data into the mix makes approaches more scientific and measurable.”

One automaker that appears to already be mindful of these findings is Nissan.

“We cited a Nissan example in the study around their efforts to grow share with the Hispanic auto buying market,” Schulz said. “These types of highly targeted campaigns with custom creative drive measurable results. It is definitely easier to simply run a few different creative messages to everyone, it just doesn’t provide the same impact. Audience segments can behave very differently and require custom approaches.”

There is a definitive shift among consumers away from traditional broadcast and cable television consumption to streaming services, OTT and online video.

“Our study reinforces the shift to live sports and news programming and away from more traditional prime-time programming for both better audiences and to minimize the DVR impact,” Schulz says. “TV still commands a large pool of advertising dollars despite falling ratings and high cost per point.”

Big television platforms like the Super Bowl have experienced declining viewership over the last two years, yet the cost of a 30-second ad has gone up over 10% in that time period.

“You see similar patterns where programs are getting fewer viewers, yet the cost is increasing,” Schulz says. “This will not last, as more advertisers are focused on ROI from their advertising spend and thus are starting to shift to mobile and other platforms where the users are spending their time.”