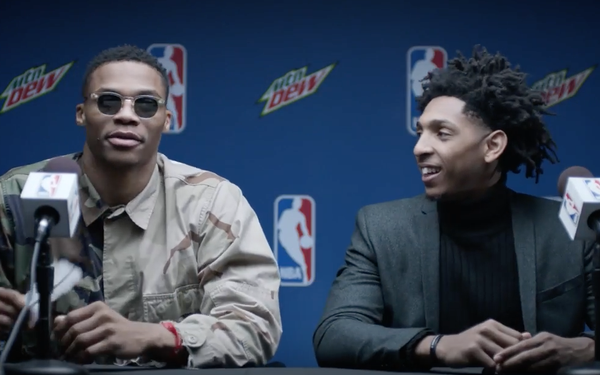 Mountain Dew is celebrating "the game beyond the game" through unique fan experiences during the NBA All-Star 2017.

Included is the launch of The Courtside Project at Courtside HQ, which brings together NBA players and trendsetters across style, art and music, and a 3x3 basketball game for elite amateur players featuring NBA All-Stars Russell Westbrook and Kyrie Irving as honorary general managers.

Westbrook also stars in new creative from BBDO New York where he challenges the expected with a new rallying cry: "Don't do ‘They' — do you.” It will premiere on broadcast during Dew NBA 3X -- All-Star Edition airing Feb. 18 on TNT. In the spot, Westbrook defies what "They" tell you to do – from sporting his signature "rule-breaking" style to ordering sushi in Oklahoma.

The brand will use NBA All-Star 2017 as its tip-off for The Courtside Project, a series of creative projects by NBA players, cultural creative icons and fans that will celebrate NBA lifestyle throughout the season. Through this series, Mountain Dew aims to get fans closer to hoops culture off the court including everything from style and music to art and tech.

the sport into music, style, art and more. It's the 'game beyond the game' and what we are celebrating through The Courtside Project in New Orleans and throughout the rest of the season," said Ryan Collis, senior director of marketing, Mountain Dew, in a release.

The Dew All-Star fan experience, Courtside HQ, will serve as home base.  For the first project, Dew is teaming up with Don C. – hoops style trendsetter and founder of the luxury sportswear brand JustDon – to announce a Capsule Collection – Don C for DEWxNBA – to be released later this year.

For the second project, hip-hop artist, actor and long-time Dew partner Joey Bada$$ will be on hand to film the music video for the first live performance of his new track "Victory"—a love letter to basketball—which drops Feb. 15. Fans will have a chance to secure their spot for a party  featuring Joey Bada$$ and DJ Irie by visiting www.mountaindew.com/nba/courtsidehq.

Finally, Dew, Turner Sports and the NBA are teaming up to bring 3x3 basketball to a national stage in DewNBA3X—All-Star Edition, headlined by Westbrook and Irving, who will serve as honorary general managers for their teams. A 30-minute special of the game will air on TNT on Feb. 18.

The top elite amateur players from across the country are matched up for intense, one-on-one elimination games to see who would make the cut and compete in New Orleans, where NBA legends Jason Williams and Baron Davis will captain the two teams.

With the help of these current and former NBA stars, the players will compete for the ultimate title in 3x3 basketball. The winning team will take home $10,000 and have the chance to compete in the invite-only NBA D-League National Tryout. Additionally, the winning GM – Westbrook or Irving – will receive $10,000 for his charity, the Why Not? Foundation or Best Buddies, respectively.

A series of six episodes running on TNT chronicles the players and NBA legends on their journey to New Orleans, from the heated tryouts to the draft to build the best team. Fans can watch episodes here.